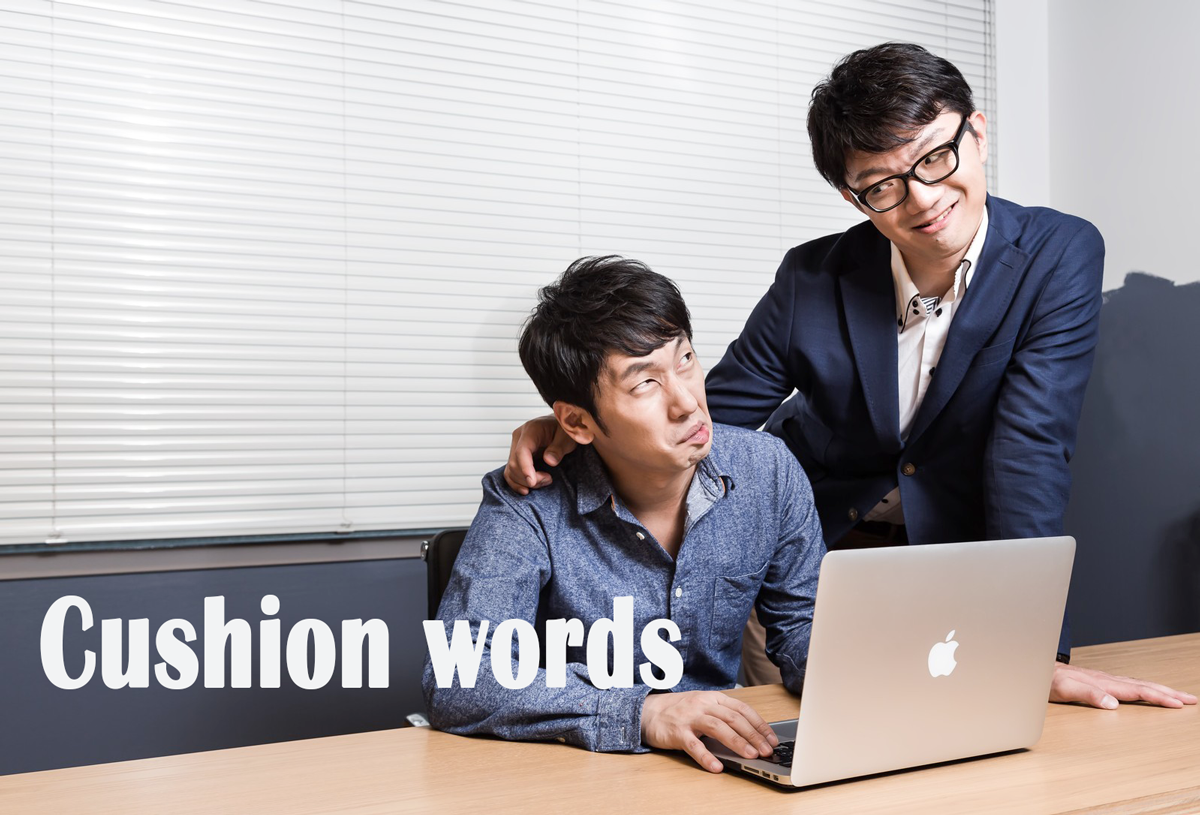 Instead of blurting things out, the Japanese turned showing consideration into an art, with an unending variety of expressions. Called 気遣い (きづかい), it is a trait the Japanese pride themselves on.
After all, when asking for a favor the last thing anyone wants is to offend the other person.

As the term cushion suggests, these expressions are used to soften the impact of what is about to be said.

Japanese knows a lot of these cushion words. This article focuses on ways to say sorry you may have never thought about. Preventive apologies might seem odd to some of us, but in Japan, everyone is doing it, all the time.

It does not mean that you did anything wrong, or that you are asking anything impudent. It just means that you are aware that your request might add to the other person’s workload or take up some of their time.

That said, they are incredibly useful and used at work on a daily basis.
Why? Three reasons: Cushion words are polite, they show respect, and they help you to build good relationships.

This expression is used when making requests or asking someone for a favor.

れ入りますが/ですが おをもう一おっしゃっていただけますか?
Sorry to impose but/ Excuse me but could you tell me your phone number once more?

恐れ means concern and uneasiness. It carries a double meaning of gratefulness and feeling sorry, as do many other Japanese apologies and requests.

You can use it in a way that means thank you very much.
Maybe your boss is about to do you a favor. In this case, saying おそれいりますが、どうぞよろしくおねがいします conveys your gratefulness and is underlining the request to the other person.

You can also use it to mean I’m very sorry.
Used in this way, the word relays uneasiness, putting you in a lower position than the other party. By doing so it shows both respect and consideration.

恐縮ですが has exactly the same meaning but is a more formal way to say the same thing. Both expressions are appropriate business Japanese, that you can use towards bosses and clients. Try the more formal version when you want to up your game and be extra polite.

Other than れ入ります, which conveys gratefulness and unease when requesting something,  しございません conveys apologetic feelings when making a request.

()しございませんが 2にしていただけないでしょうか？
I am sorry for the inconvenience, but can we change it to 2 pm?

Using しございません like this sends the message that you are sorry for something.

In this case, you didn’t do anything wrong and might not even be the cause for the change. Still, apologizing shows the other person that you are aware your request might cause some inconvenience.

Of course, you can also use this expression when you are in some way responsible, when you want a second opinion, or a confirmation.

しございません、
I am sorry for the inconvenience, but could you please take a second look at it?

Remember to put が at the end. If you only say しございません it is a rather serious and formal apology.

This phrase also is an apology, but rather than apologizing for something you did or a status quo as in the case above, you apologize for something rude you are about to do.

ですがおをフルネームでおえいただけますか。
Excuse me (for my rudeness but) could you tell me your full name?

ですが、はどのようなごでしょう。
I’m sorry, what is on the agenda for today?

It is really a preventive measure to make sure the other person isn’t possibly taking offense. Asking for confirmation, or not understanding someone’s name are good examples of behavior that could be seen as “rude” or rather inconsiderate.
It is the least formal expression among the three introduced here, so you can use it freely for small request the other person can do immediately and easily.

These three expressions are always used at the beginning of a sentence. They do not affect the meaning of what follows but set a positive atmosphere for the conversation. Just like a fluffy pillow, hence the name cushion words.

Try using them sometimes. You might notice someone having a hard time refusing you.

What is the JLPT and When to Take it
Guide to the Business Japanese Proficiency Test
Business Japanese Vocabulary for Job Ads
The 5 most important everyday expressions at the...
Share
business japanese

All about Working in Japan!
◆
Stress-free to success:

How-To Guides, busted myths, problems you didn’t yet know you have, first-hand experiences,

and the up-to-date information for your job-search in Japan!

Japanese Typing Test – Unannounced at the Jo...
An Engineer’s Glimpse into the Japanese Work Cultu...
SPI Test – All you Need to Know
Areas with Cheap Rent in Tokyo
Jiko-PR: How to sell your strengths in Japanese

Internships for International Students in Japan
Are you doing all you can to find the perfect job?
4 Japanese Business Greetings you need to know
Shokumukeirekisho – How to write that other ...
Finding a job in the Japanese IT industry