5 Autumn Leaf-Viewing Spots in and around Tokyo 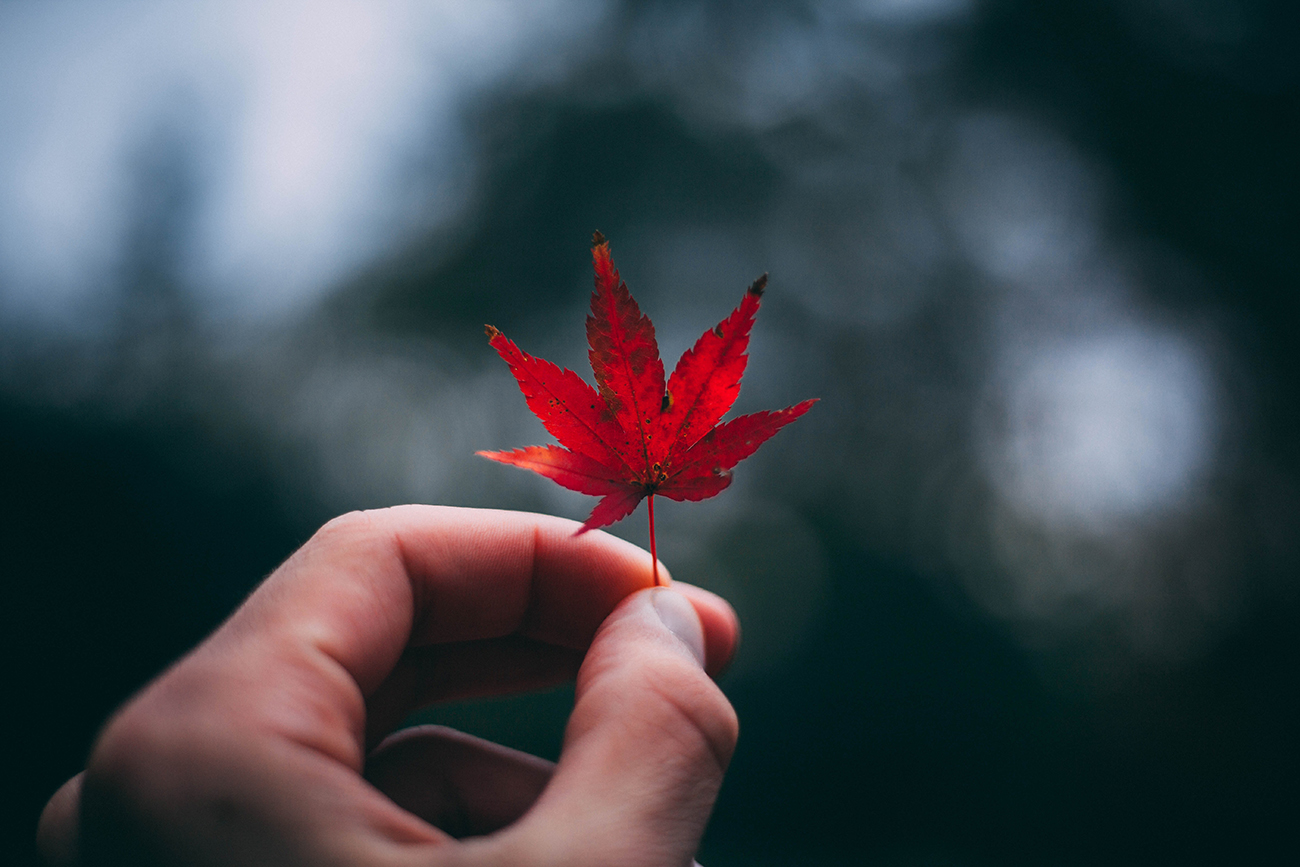 Looking for some autumn leaves, but don’t want to travel far? No problem! Even the concrete jungle that is Tokyo offers some more than decent options. Here are five recommendations for easily accessible leaf-viewing spots within the capital.

Aside from the cherry blossom season, the autumn leaf season is the second most popular travel and tourism season in Japan. The stifling humidity of the summer is no more, and with the changing of the leaves, there’s a lot of natural beauty just waiting to be marveled at – without the pesky pollen that you have to deal with in spring. Many Japanese people I’ve talked to say autumn is their favorite season because of this.

In lower-lying regions (such as Tokyo, Kyoto, and other major cities), the leaves only start changing colors quite late, most of them staying green throughout October. In high-altitude areas like the Japan Alps and northern regions like Hokkaido, the process already starts in September. 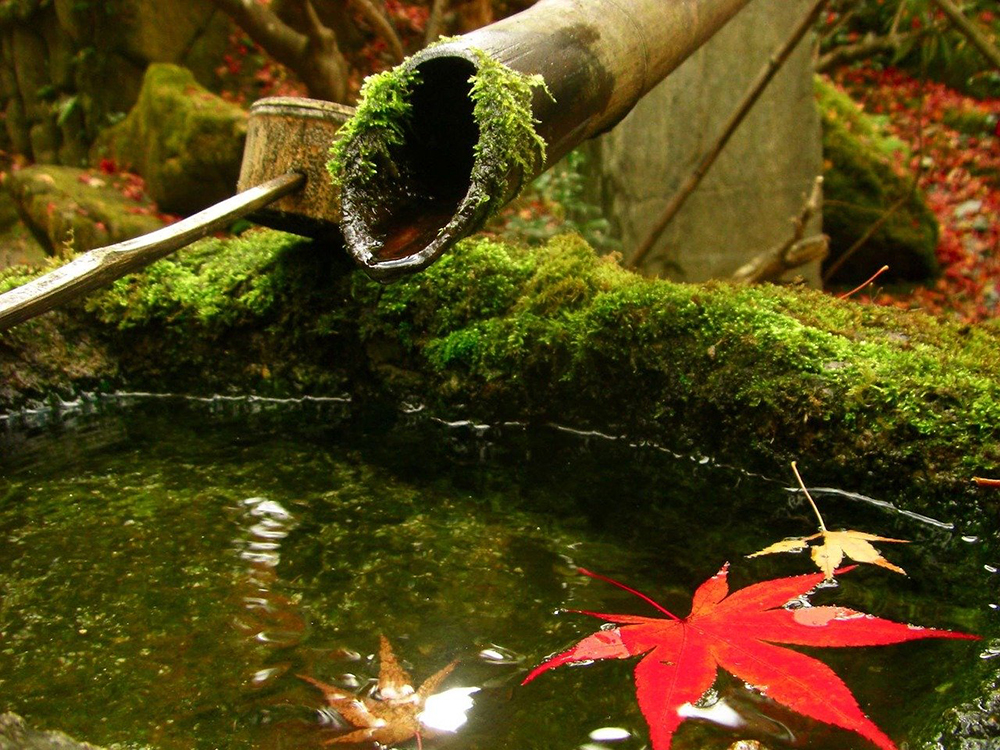 When hearing people talk about the fall in Japan, a common word you’ll encounter is “Momiji” (もみじ). Strictly speaking, that word is reserved for the red leaves of the Japanese maple. However, over time, it has almost become synonymous with autumn leaves in general. To make the confusion complete, the kanji for もみじ (紅葉) can also be read as こうよう, in which case the word does stand for “leaves changing color” in a wider sense!

Another thing that always confused me a bit was the word 紅葉狩り (もみじがり), a general term for autumn-leaf viewing. 狩る (かる) means “to hunt”, but you don’t really “hunt” leaves, right? They’re right there on the trees and can’t run away! As it turns out, while 狩る originally meant (and still means) “to hunt”, the word eventually came to encompass meanings such as “to take/collect” (ex. イチゴ狩り) and “to look at” as well.

But regardless of how you talk about them, there’s a clear consensus that autumn leaves are a must-see each year, just like cherry blossoms. With entry restrictions for short-term visitors still in place, 2020 is an ideal year to experience the sceneries without the usual mass of tourists.

Five Spots in and around Tokyo

Japan offers a lot of exciting spots for enjoying the autumn views – the gardens of Kyoto temples such as Rurikoen or Tofukuji, or the slopes of Mount Koya. However, when you’ve just started working, you often just don’t have the time (or the money … or both) to spend your weekends traveling all around the country.

Luckily, while Tokyo is not known for its natural beauty, there are quite a few spots where you can experience those autumn feelings all the same. Here’s a selection of a few of them (partly based on personal experiences).

This big garden right in the middle of Shinjuku dates back to 1772 when it was first built as part of a noble residence. It was converted into an imperial garden in 1906 and was made open to the public after WW2 in 1949. It offers a lot of variety, featuring a Japanese garden, an English landscape garden, a French formal garden, a Chinese-style pavilion, and a modern greenhouse.

In autumn, the main areas to check out are the Japanese garden with its maple leaves and the ginkgo trees around the area of the greenhouse (picture below – taken in late November). To check out how the leaves are doing, have a look at the official Twitter account. 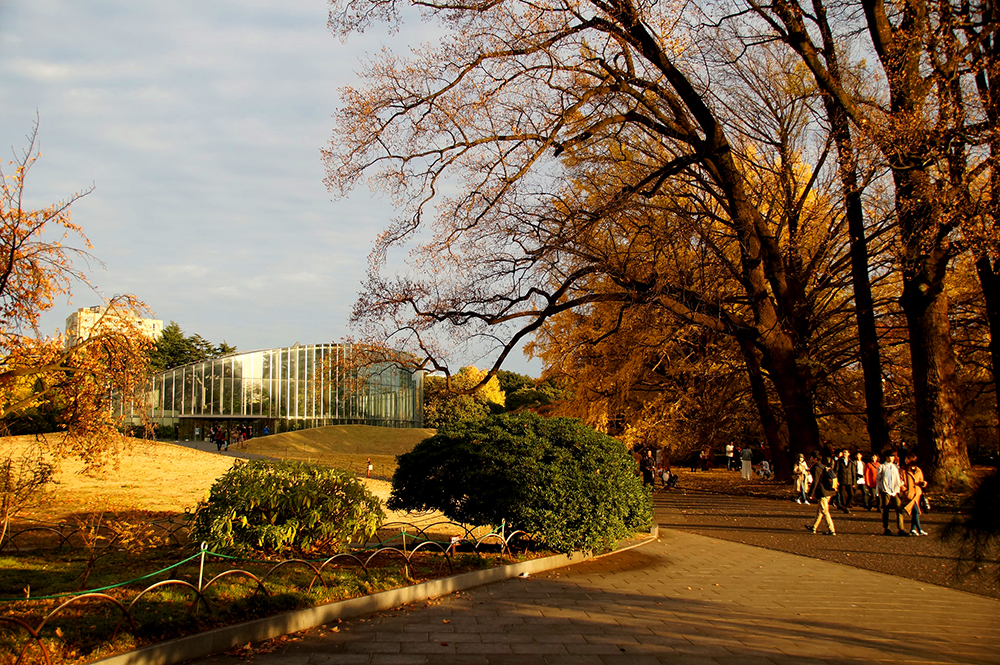 Access: Get off the train at either Shinjuku-Gyoemmae station (Marunouchi Line) or Sendagaya station (Chuo Line), then follow the signs pointing to the gates.

This smaller garden was created by Tokugawa Yorifusa and his successor, Tokugawa Mitsukuni. Due to the creator’s Confucian education, it has strong Chinese influences. Many of the garden’s elements are miniatures of (or homage to) places in China, arranged around a central pond. The name “Korakuen” (後楽園, こうらくえん – literally “after-pleasant-garden”) is derived from the Chinese phrase “a good ruler worries about the world ahead of time, and enjoys its pleasures late.”

This garden also has a Twitter account with daily updates, so have a look before deciding if it’s the right time to go yet. 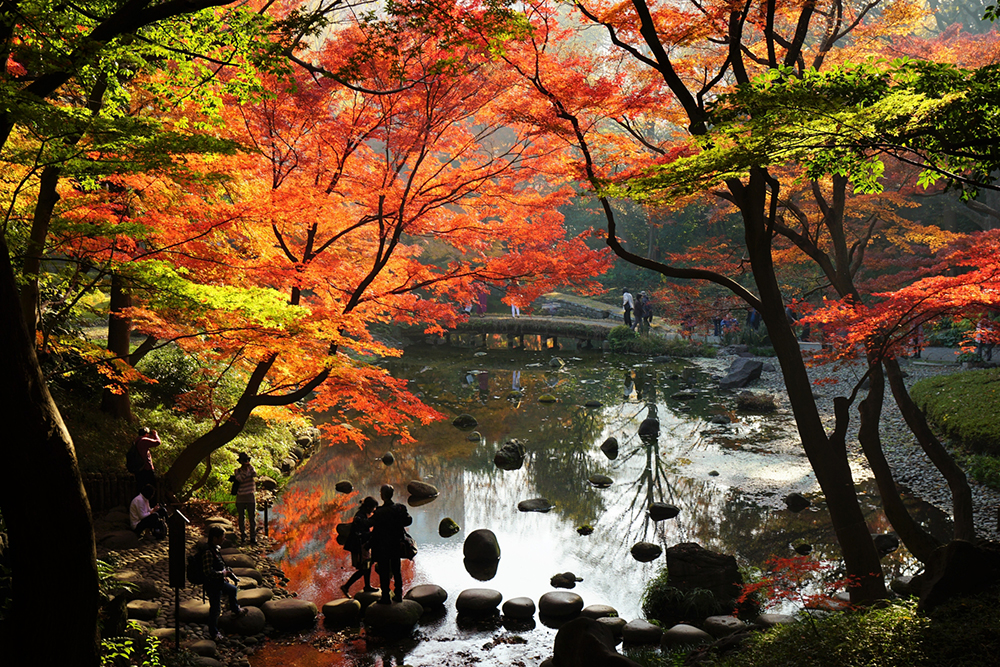 Access: Get off the train at Korakuen station (Marunouchi Line, Nanboku Line), then turn right at the big crossing in front of Tokyo Dome and walk along the outer wall of the garden until you reach the entrance.

The Meiji Jingu Gaien was built on top of the former Aoyama parade grounds and opened to the public in 1926. It’s more of a public park than a garden. At its northernmost part, you can find the Shotoku Memorial Picture Gallery, and the central area is made up of sports facilities, like a baseball field and tennis and futsal courts.

In the southernmost part of the area, you can find a long road lined with ginkgo trees. From Aoyama-dori, you can snap a neat symmetrical shot with the picture gallery in the background! 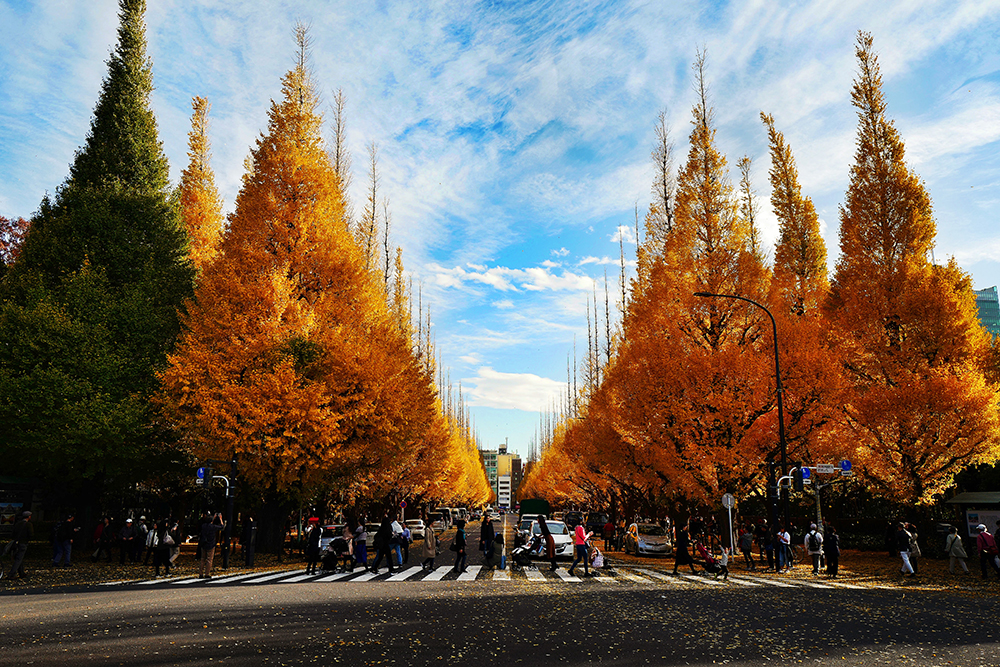 Access: Get off the train at Aoyama Itchome station (Oedo Line, Hanzomon Line, Ginza Line) or Gaiemmae station (Ginza Line), then go straight until you spot the ginkgo trees

Entry fee: none (entry to the picture gallery costs 500JPY)

This garden forms a pair with the aforementioned Koishikawa Korakuen – they were at one point considered “Tokyo’s two big gardens”. Construction started in 1695 and finished seven years later. In contrast to Koishikawa Korakuen, this is a purely Japanese garden, although its name is of Chinese origin. The “six” in its name refers to the six topics and styles of ancient Chinese poems. For updates on the leaves, you can follow the garden on this account.

Fun fact: After access to the garden was made free in 1972, visitors started stealing ducks and koi from its ponds. As a result, the entry fee was reinstated. 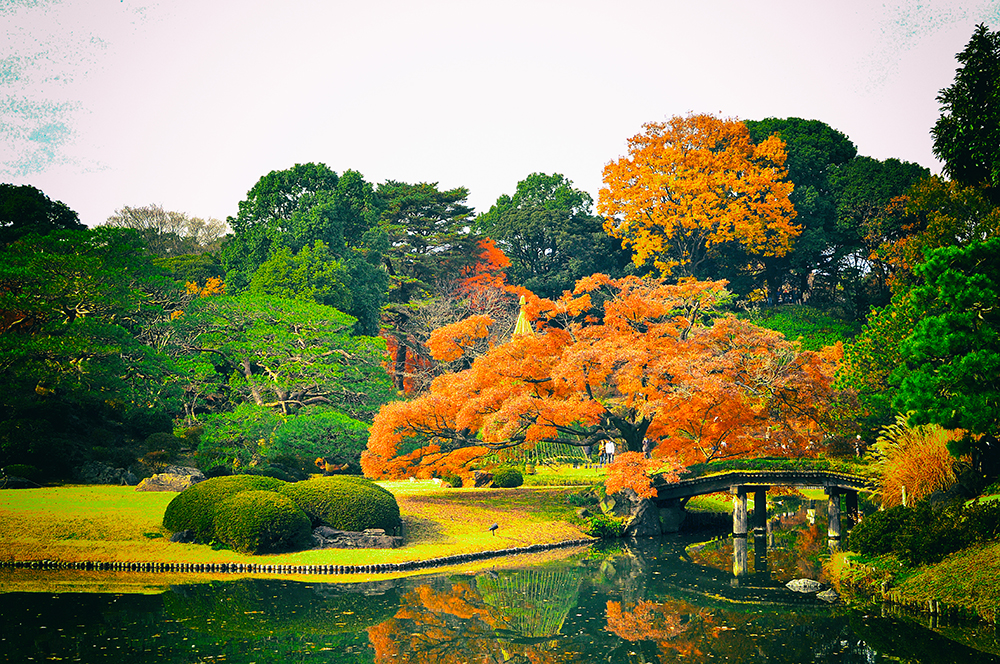 Access: Get off the train at Komagome station (JR Yamanote Line, Tokyo Metro Nanboku Line). If you take the Nanboku Line, Exit No. 2 will lead you right to the garden entrance.

599m high Mount Takao is Tokyo’s go-to area if you want to escape the city and bathe in nature for a while. The mountain is home to Japanese giant flying squirrels (ムササビ) and also associated with the mythological Tengu.

On foot, the 3,8km long main route to the top takes a little under one hour and a half. If you use the cable car, you’ll reach the summit in about 45 minutes. On a clear day, you can see areas like Shinjuku and Tokyo Sky Tree from the summit, as well as Mount Fuji. If you’re in a real hiking mood, you can continue from there to Mt Jinba. The trip from the station to Mt Jiba and back takes around five hours (without breaks), but is pretty easy overall.

For Takaosan leaf updates, check out this page (the small tree icon below the picture tells you the current status of the leaves). 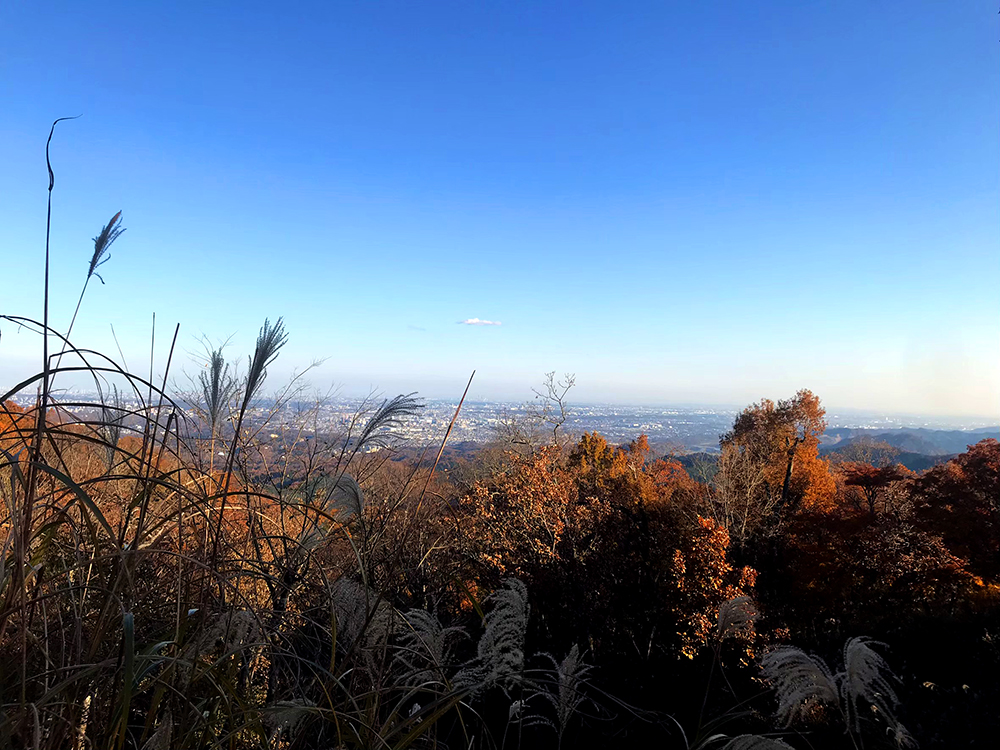 Entrance fee: free (one-way fare for trains on the Keio Line from Shinjuku is 388JPY)

Opening Hours: the last train bound for Shinjuku leaves at 23:33

Are you feeling the autumn mood? If exploring nature during fall is your thing, consider checking out Japanese ranking websites like Walker+ where you can find recommendations for places all across Japan. Easy day trips from Tokyo are Nikko, Kamakura, or the Okutama region (technically part of Tokyo, although it doesn’t feel like it) – beyond that, the options are almost endless.

In contrast to this year’s Hanami season, Japan-internal travel restrictions have mostly been lifted – so if you have the opportunity, take some time to explore tourist-free areas!

How to Schedule a redelivery (Japan Post)
Getting a Mobile Phone in Japan – Long and...
Guide to getting your Internet plan for Japan
Rent Cost in Tokyo – The Ultimate Guide
Share
freetime activitiestravel

The 44 Most Common Japanese Interview Questions &#...
Internships for International Students in Japan
How to Transfer Money To and From Japan
Gijiroku – Keeping track of meetings in Japanese
First steps to working in Japan

Remembering Kanji – Four Methods Compared
Taxes and Insurance when Working in Japan
Working as a Developer Without Speaking Japanese
How to rent an Apartment in Japan – Step-by-step G...
Business Japanese Vocabulary for your Resume