Getting a Mobile Phone in Japan – Long and Short-term Options 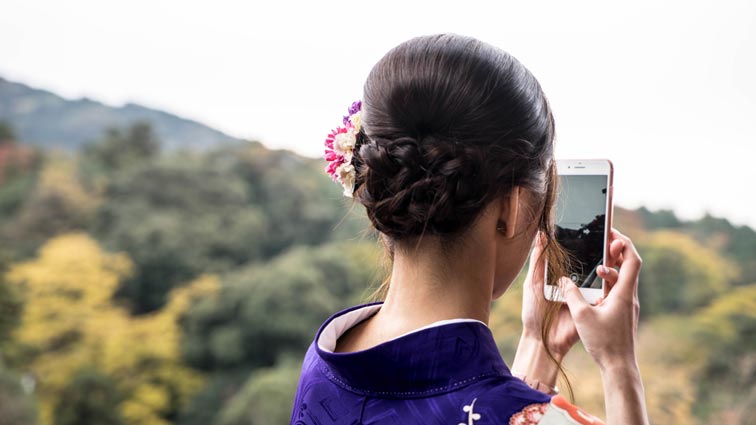 Staying connected is vital today, whether you’re in Japan short-term or long-term. This article shows you the different options for getting a working phone in Japan.

These three are the biggest providers because they are “true” mobile network operators (MNO), meaning that they own the network infrastructure.
There are also mobile virtual network operators (MVNO), which rent the MNO’s resources for their services. This enables them to offer plans at lower prices than the “big three”. MVNO’s are also the go-to services when looking for (cheaper) SIM card-only contracts.

If you’re here for a short trip, you’ll most likely pick up your hardware at the airport or another central location (train station, hotel). If you’re looking for a long-term contract, you should take your time, go to one of the big electronics stores (Yodobashi Camera, Bic Camera) and talk to the staff there.

The standard: phone and contract

This is the option most Japanese people use. You simply buy a new phone, complete with the accompanying contract.

The standard duration for contracts is 2 years. The phone itself will be SIM-locked and can be paid for all at once or in installments ranging between 24 to 48 monthly payments. If you go to one of Japan’s three main carriers this is what most plans are going to look like.

If you cancel your contract early you will still have to pay off your sim-locked phone, so this option is only recommendable if you are sure that you’ll stay in Japan for 2+ years. Also, most providers currently require cancellations fee payments of up to ¥10,000, though this is expected to change at the end of 2019.

How much you’ll end up paying depends on what kind of device, installment plan and contract you choose.
To give you a general idea about what kind of prices to expect: An iPhone Xs (64GB) at a 24-month installment rate with a 50GB data and a standard voice plan will set you back around ¥10,000 a month.

If the phone that you already have isn’t SIM-locked, you can probably save a lot of money by just getting a Japanese SIM card for it. Your options here are either a plan that includes a phone number, or a plan without one that just gives you access to data.

SIM card-only plans are not only less expensive in general, but quite a few of them also feature shorter contract periods (between 5 to 6 months). Some even come without a minimum contract period or any cancellation fees.

For cheap SIM cards, you can choose between a multitude of MVNOs, for example:

Depending on the plan you may be able to choose the mobile network you want to use (Docomo, Softbank, au). Generally, Docomo is said to be the best. What decides about the speed and quality of your connection however isn’t only the network but also depends on the rental agreement between your carrier and the network provider. Keep this in mind when deciding on a plan and check the small print regarding potential restrictions.

If you want to find a job in Japan, a voice plan is probably the better choice. During my internship, I came here thinking that I could just rely on Wi-Fi for my daily needs. But then I realized that it’s not possible to complete many registration processes (including those for job fairs) without a phone number.

Mobal and Sakura Mobile are your choice if you’re in Japan for less than 6 months and only speak Japanese a little. Their monthly rates are a bit higher than those of other companies, but in return, you’re able to cancel your contract at any time and for free. They also offer customer service in English.

If you’re staying between 6 months and a year (and know some Japanese), you can save money by using other options. Depending on the operator, you might need a Japanese debit or credit card though. When I did my 6-month internship, I had to open a Japanese bank account anyway. So, I took the opportunity and entered into a cheap contract.

While there are exceptions, the majority of voice plans still come with a minimum contract period and cancellation fees. With data-only SIM cards, you won’t have access to a Japanese phone number, but in return, many plans can be canceled at any time and don’t require you to pay any extra cancellation fees. Of course, they’re also even cheaper than voice SIM card.

These SIM cards are useful if you bring a second device, like a tablet, or travel in a group and only need one phone number.

Finally, here are some prepaid options for when you’re in Japan anywhere between one to four weeks. Since these services are tourist-oriented, you’ll be able to pick up the hardware at the airport or have it delivered to a destination of your choice (e.g. hotel).

These are provided only by Softbank through their Simple Style service. You pay for the phone and plan in advance and can then charge again if needed. You can choose between two different models of “classic phones” as well as smartphones. There aren’t many options regarding phone models, but if your own phone is SIM-locked for example, it’s still better than nothing.

There are actually quite a few Wi-Fi spots in Tokyo, but many of them only have instructions in Japanese and/or hidden costs attached to them. If you just want to use your own phone for data and avoid confusion, you can choose a pocket Wi-Fi router. Short-time provider options include the aforementioned Sakura Mobile and Ninja Wifi. Two weeks will cost you about ¥10,000.

Residence status. If you want to enter into a contract that exceeds the maximum number of days allowed under a tourist visa, you’ll have to prove that you’re a resident. So, don’t forget to bring it with you to the electronics store (you should have your residence card on your person at all times anyway).

Cancellation fees and timing. Check the cancellation policy for your plan and if possible, avoid canceling your contract before the minimum contract period runs out. Currently, cancellation fees for many plans are around ¥10,000. While it’s not a fortune, it’s good money that you could spend on something else.

Most contracts are renewed automatically. If you’re here for 6 months, for example, make it clear that you want to let the contract run out without renewal. Based on personal experience, I’d say it’s probably best to go directly to the store for this.

Japanese customer service. Even if you’re fluent in day-to-day conversations, dealing with cellphone and contract jargon in Japanese can be difficult and tiring, so prepare accordingly by researching beforehand. There are many details in the fine print, and shop clerks will try to sell you many small “extras” with your contract that you probably don’t need.

Bank accounts and credit cards. Between providers, there are many differences regarding what kind of payment options they support. For some, you’ll need a Japanese bank account, others will accept only credit cards, not debit cards. On the other hand, some providers that are OK with international credit cards and/or bank transfers.

Make sure to ask the payment question in the beginning. It’s frustrating to go halfway through the sign-up process just to be told that you can’t pay with the card you have.

Cut down on flat rates. Think about your day-to-day phone use before buying. In times where even businesses increasingly rely on messaging apps, times when you HAVE to call someone have become quite sparse. How many minutes do you really spend on phone calls each month? The same is true for data: Choose a flat rate that corresponds to your needs and daily activities instead of “the best/recommended one”.

Japanese Job-Hunting Portal Sites
Everyday Work in Japan: Improvements and Challenge...
How to fill out the Customs Declaration Form for J...
7 Part-time Jobs in Japan for Foreigners
Japanese Labor Law Essentials you Need to Know

Surviving at the Japanese Workplace: 5 Hurdles for...
Job Hunt in Japan: A Professional’s Perspect...
How to stay safe during an earthquake
25 Business Japanese words you can remember instan...
5 Japanese Podcasts for Immersion (JLPT Level N3+)