Shuukatsu – Job Hunting in Japan as a Student 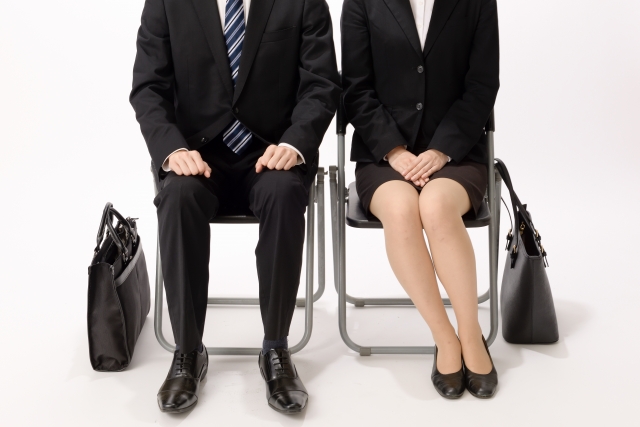 How do you job hunt in Japan as a soon-to-be university graduate? This question can cause a lot of confusion. All sorts of rules and schedule guidelines make it hard to keep track of things. To untangle the mystery of how Japanese people get their first job, let us look at the basics one by one.

*This article is about the traditional Japanese job hunt season. For info on how to job-hunt more flexibly “off-season”, check out check this article.

Shuukatsu (就活) is short for (“job-hunting activity”). It describes the standard flow that Japanese students go through to get their first job out of university. Students secure a job in their last year of university and start working in April of the following year. This system allows for a smooth transition from university to a job, without any “gaps” in between. Using this system, over 80% of job hunters get a job offer around 8 months before they graduate.

In contrast to Europe or the United States, the hiring schedules are highly unified. Below, you can see the flow of a traditional Japanese shuukatsu season. The main “job hunt” starts in March and ends around September/October. There’s also a second, smaller application window in fall/winter for those who weren’t successful in spring. Although the run for the open position starts on March 1st, Japanese students start preparing as early as one year before the start of the job-hunting season. 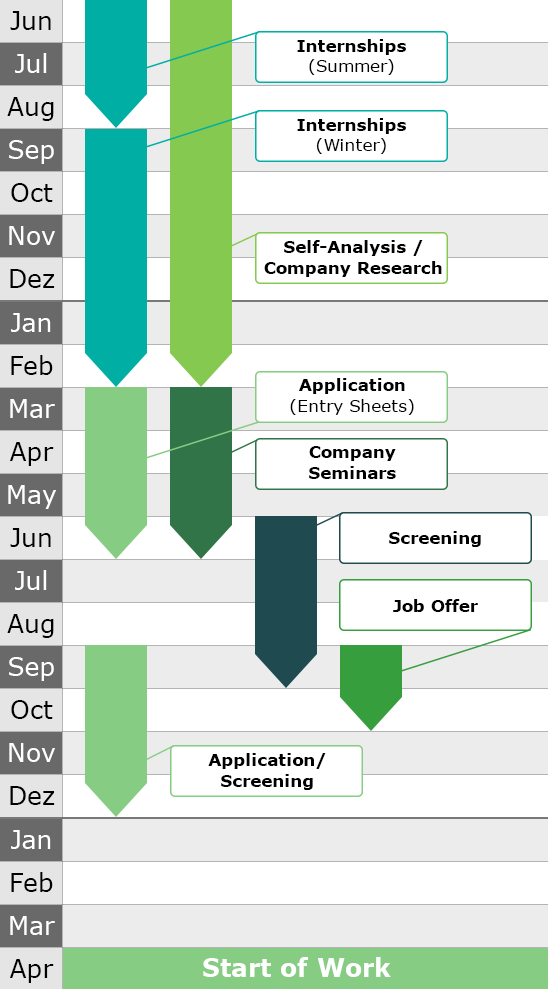 For foreigners, the Japanese hiring cycle means not only less flexibility with your starting date but also a stricter hiring flow that you have to consider, so you can get the job you want at the time you need it. Let’s take a closer look at the details of the typical Japanese job hunt.

When: (as early as possible) – February

Japanese students start preparing for their job-search from the summer vacation of their 3rd year at university, around 1,5 years before they graduate. They are expected to spend a considerable amount of time on figuring out what their skills and interests are, and which business field might suit them.

Self-analysis and research is something that can easily be done anywhere and in your native language. Nevertheless, this step is frequently skipped by job-hunters. Why not use that in your favor? Gaining a better understanding of yourself, your skills and values, and how to present them, will give you an advantage over other job seekers. It will also help you single out positions that really suit you and match your expectations. You can find out more about self-analysis (and a free worksheet) in our article over here.

Internships are less common than in the West, and most of them are ultra short-term (1-2 days). They resemble extended workplace tours and are seen as networking opportunities. Officially, internship attendance has no effect on the later screening process. But establishing direct contact with the people at the company early on can definitely be beneficial. Internship attendance is highest in the summer before the start of the job-hunting season, in August. The main application window is in June/July.

When: (as early as possible) – February

After thinking about their skills, personality, and values, students gain a general understanding of the business areas they are considering. The next step is to narrow down the options and do research on specific jobs and potential employers.
Time is also invested into finding out about the company’s market and competitors. The better you know the company, the better you can explain why you want to work there and how you can be an asset to their operations.

Somewhere in this time frame, Japanese students will also brush up on their middle school math and high school Japanese knowledge. In specific sectors like IT or design, students also focus on gaining work-relevant skills or creating a portfolio. All this is to prepare for the inevitable testing of “working skills” that will take place during the interview process.

When: March-June
The three channels for job-hunting in Japan are:

Job hunting season starts on March 1st. All big job portals go live, and companies are not allowed to start their recruiting process before this day.

Instead of handing in a full-blown resume and cover letter right from the start, Japanese students first fill out so-called entry sheets. Entry sheets are similar to CVs but a bit shorter and serve as your “ticket” for formally entering a company’s selection process. Although they might not look like it, you can fit quite a bit of information on these small slips of paper. Try to gear your documents to the company as best as you can.

The March 1st starting date only serves as a general guideline, especially for the “big players” (members of the Japan Business Federation). There is a long history to these self-imposed hiring restrictions. But smaller companies, multinationals, and startups are not bound to them. If you don’t rely on the mainstream job portals (MyNavi, Rikunabi, etc.), it’s possible to apply earlier than March.

After submitting their entry sheets, students attend company seminars, called . There, prospective employees are given a general summary of the company and its products and services.
Company seminars are also a place for candidates to ask questions, and for companies to scout out promising candidates. To make a good impression, some students will prepare questions to ask at the event in advance. This first step can include some form of group task or even a test at the end of the seminar.

Japanese companies are said to pay close attention to the candidates’ personalities. Instead of a rigorous selection based on the CV and hard skills alone, the hiring process is designed to interact with as many candidates as possible and gauge whether they’re a good fit for the company.

Around 70% of the companies follow this schedule, but it’s not set in stone. Interviews might be held before June, and if you’re fast, you might already get your job offer in June or July. Also, companies will keep accepting applications later in the year until they find the right candidate.

Tests formats during the interview process can vary widely. The most well-known standardized test is the SPI (Synthetic Personality Inventory). Some companies will also have their own tests to check your general knowledge.

By October, the interview results will be out, most jobs will be filled, and close to 90% of Japanese graduates will have decided on a company.
Many companies hold a a ceremony to welcome the new recruits to the company and introduce them to the other employees for the first time. This final, formal part of the shuukatsu process can often be skipped for foreigners.

This is how the average Japanese is finding his first full-time job. The main reason for this unified hiring cycle is that many companies train their new recruits on the job. Organizing the training process (involving mentors, internal seminars etc.) would be a lot more difficult if inexperienced new employees kept dropping in throughout the year.

If the circumstances allow it, you can finish shuukatsu in around four months (March-July). But it often ends up taking longer, and visa issues and other things often prevent foreigners from following this traditional schedule. In recent years, however, the system has opened up. Foreign applicants can skip parts of the process or apply “off-season.” For more info on how to job hunt in Japan based on your own schedule, check this article.

What do you think about the Japanese recruitment system for new graduates?
Please, share your opinion of the Japanese hiring cycle in the comments!

Dresscode for Japanese Job Interviews – Re...
Shokumukeirekisho – How to write that othe...
Suits or no suits – What to wear for your ...
Useful items for Job Search in Japan
Share
job interview

Entry Sheet – everything you need to know!
Internships in Japan for Foreigners and How to Fin...
Electrical Engineering Jobs in Japan
Where do you work? Japanese Industries and their N...
How to charge a Suica card