How to rent an Apartment in Japan – Step-by-step Guide 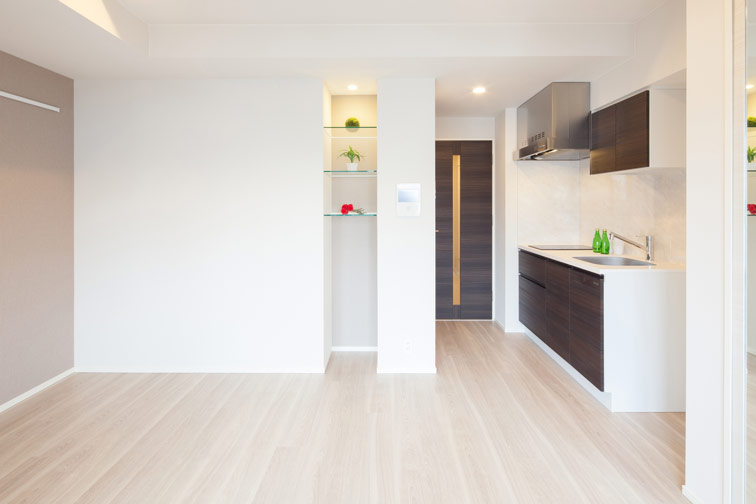 Do you want an apartment in Japan, but are not sure about how to get one? This article walks you through the process, from searching online to picking up your keys.

When first coming to Japan, many foreigners choose a dormitory or share house. The reason is simple: Getting a room from overseas is fairly easy and doesn’t cost as much upfront.

However, once you have a job and decide that you’ll be living in Japan for the foreseeable future, the desire for a private apartment becomes stronger. I recently signed the contract for my very first apartment in Japan and will share my experiences and findings in this article.

This article focuses on the renting proctess itself. If you want to know more about the costs, check out our article on how to save money when moving in Japan.

Before we get into the details of the apartment search process, let me talk about general requirements and factors that you should think about before looking at individual apartment offers.

Everything you need for renting

Here’s a list of things you need to sign an apartment contract. Prepare these in advance and have them ready (e.g. in a digital format) so that you can provide them immediately when asked to.

A guarantor is a person that pays for any expenses (rent, damages, etc.) that you’re not able to come up with. Because they have to be very close to you on top of currently residing in Japan, many foreigners (and even many Japanese) have a hard time finding one.

But don’t despair: If you pay a bit extra, you can get a guarantor company to shoulder that responsibility for you.

If you are going to stay for less than two years and want your own place, look into the apartment offers from share house companies like Oakhouse and Sakura House . The rent is relatively high compared to regular apartments with 2-year contracts, but initial costs are lower, utilities are included and many of the rooms are furnished, so overall, it’s not as bad a deal as it first looks.

Avoid moving early in the year. The time between February and April is “moving season” in Japan, especially in the big cities. You have students moving into their first apartment for university, people from other parts of Japan moving for a new job, etc.

Many landlords use this opportunity to increase rent on their apartments, ask for higher deposits or key money, etc. Moving services also tend to cost more during the busy season (繁忙期, はんぼうき). If you have the option to do so, you should move after mid-April.

Look for foreigner-friendly agents. It is a sad truth that many Japanese landlords simply don’t accept any foreigners in their apartments. By choosing an agent with connections to people that are OK with renting to foreigners, you save yourself time and frustration.

Below is a list of some English-speaking agents for the larger Tokyo area:

Now that we have all the basic stuff covered, let’s look at how to search for an apartment step by step. 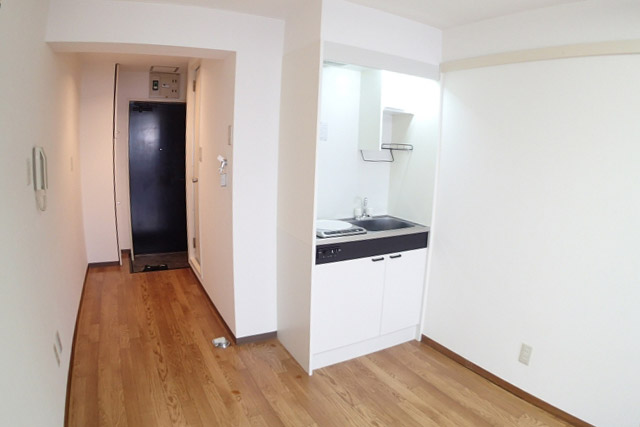 The first step is simple: You start by looking for places that fit your needs and requirements online. If you are an employee, chances are you want to look for a place on a train line with a stop near your company. Of course, you can filter the results by other criteria too. Here is a short selection of sites and apps that you can use for scouting:

When you find a place you like, you inquire about it via an online form. Usually, you ask about the initial costs (初期費用, しょきひよう) first because sometimes not all of those expenses are listed on the offer page. Unless you make the inquiry on a national holiday or late at night, the agent should call you back on the same day.

Once the agent calls you, you make an appointment for meeting them directly at their office. Looking at offers online will give you a general idea, but information can be a bit fuzzy, outdated or in some cases even misleading. The databases that agents use have better information quality, so I’d recommend making an appointment sooner than later.

Things that influence your apartment choices

Here are some things other than pure rent prices that may affect your choices or that you could want to filter for.

Key Money. Also called “monetary gift” (礼金, れいきん). This additional (one-time, non-refundable) payment is seen as a “thank you” gesture towards the landlord for being so kind to rent you their apartment. The number of places requiring it has decreased in the recent past and in most cases, you can filter them out with the click of a button.

Washing machine outside/inside. Already mentioned in the previous point, but once more for clarity. Some apartments don’t come with an indoor hookup spot for a washing machine. You will either have to place it on the balcony, the corridor in front of the apartment or somewhere else. There are also (cheap) places with no washing machine spot at all. In that case, you will have to use a laundromat.

Separate bathtub and toilet. Apartments towards the budget end of the rent scale tend to have so-called “unit baths” (UB). Those are fully pre-fabricated (plastic) rooms combining washbasin, bathtub, shower and sink all in one package. Depending on the apartment, they can feel quite claustrophobic. Fairly cheap apartments with separate bathtub and toilet do exist. Most of the time, however, they will be a little more expensive than their counterparts with UBs.

Number of kitchen burners. If you would like to make yourself a more sophisticated meal every once in a while, a single ceramic glass cooktop may not be enough for you. Look for a place that has at least two cooking spots or enough kitchen space for a separately bought gas burner.

Furnished/unfurnished. The overwhelming majority of Japanese apartments are unfurnished. However, there is the occasional furnished room. By choosing one, you can save on your initial expenses. 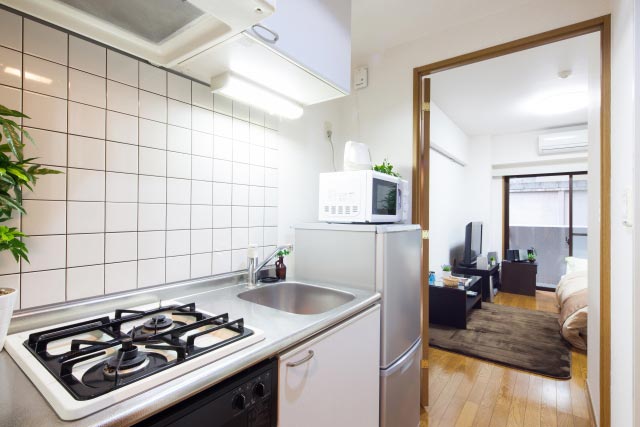 Decide on a place

Even if you only inquire about one specific place beforehand, the agent will ask you about your requirements and show you some more options just in case the first one doesn’t end up working out.

If possible, you should request to have a look at the place before you make your decision. However, in densely populated areas, inspecting the apartment beforehand might not be possible because the current tenant is still living there. This is especially true if you start searching far in advance.

If you like everything else about the apartment offer, you will have to make a call: Do you trust the agent or take some more time to look into other options? Many agents will encourage you to make your decision on the same day. However, moving costs you a big chunk of money, so take as much time as you need and make sure that you are comfortable with your choice.

Be aware though that if you decide on an old offer after searching some more, someone else might have already taken the place (this happens more often than you’d expect).

After you make your decision, the agency, the guarantor company (if applicable), the management company of the apartment and the landlord will run checks (審査, しんさ) on your documents and background.

During this stage, expect to receive some calls from these people and answer simple questions for verification. Your (domestic) emergency contacts will also be called, so make sure to notify them. If you’re not able to answer calls during regular work hours, tell the agent when you’re having your lunch break in advance.

In addition to telephone numbers and personal details, your income will also be checked. In most cases, you will be required to provide payslips for the past three months to prove that you’re “stable enough”, money-wise. In general, the rent should not be higher than 30% of your monthly income.

At this stage, you’re almost finished. You now go to the agent’s office again and let them read you a list of regulations and conditions. After confirming that you accept the rules, you have to fill out forms – a lot of forms, most of them twofold. In my case, the whole procedure took between 2 and 3 hours. In the end, you make an appointment for picking up the key.

The timing of the payment can differ depending on the agent. Passing the checks means that everything is in order and there won’t be any problems with the official contract (which is a formality at that point), so in some cases, you might be asked to pay beforehand.

The default payment method is a standard transfer from a Japanese bank account, which you can do at every ATM supporting your bank. Sometimes, you will be able to pay with your credit card or be asked to pay (part of) the cost in cash, but those cases are quite rare.

Get water, electricity, and internet running

The next thing you’ll have to care about are the so-called “lifelines”: water, electricity, and internet. Some agents will offer you to handle this for you, so you can focus on moving your things. However, if you want full control over your contracts or fish for cheap ones, you can also choose to contact each company separately yourself.

In case you’ve been living in a share house or dormitory and don’t have big furniture items yet, you may be able to make the move all on your own.

If the new place is far away or you have larger things like futons to transport though, you will either have to rent a car or contact a moving service. Below, you can find some service options (although there are many, many more).

Looking at offers on specialized websites gives you a general idea of what to expect, but if you want to get detailed and up-to-date information, contacting an agent is a must. Many will encourage you to decide fast. Since moving is money-intensive, be sure to weigh your priorities properly before making a decision.

Check out these articles for more information.
■ Rent and Move-in Costs in Japan
■ Share house or Apartment? A comparison
■ Get your furniture for cheap!

Getting a Mobile Phone in Japan – Long and...
Guide to getting your Internet plan for Japan
Rent Cost in Tokyo – The Ultimate Guide
How to save when moving into a Japanese Apartmen...
Share
housingmoving to japan

The right visa for your stay in Japan
How to return your Suica
IT Jobs in Japan for Foreigners
Guide to getting your Internet plan for Japan
Black Companies: What they are and how to spot the...

Internship Guide
Cheap Furniture for your Apartment in Japan
The 5 most important everyday expressions at the o...
Japan’s National Holidays 2021
Annual Leave in Japan – Taking Your Well-Ear...