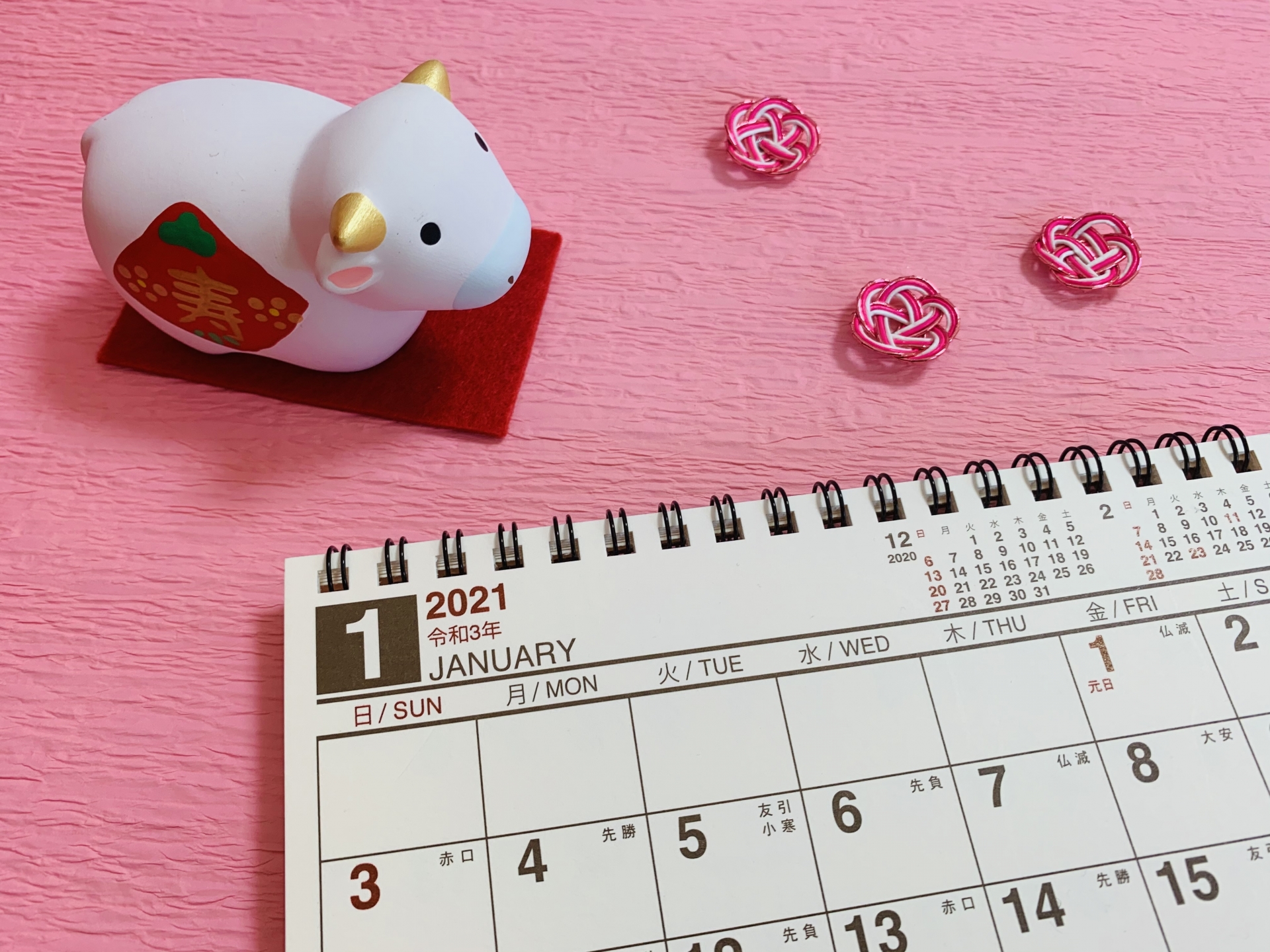 Japan has quite a few national holidays to make up for its relatively low amount of paid leave. Check out this article to plan for your next holiday! (This article was last updated on December 7th, 2020.)

National holidays and their meanings

Japan has a total of 16 public holidays (祝日, しゅくじつ). They are fairly evenly spread out around the year, so that there is an extra day off almost every month.

There are two rules regarding holiday observance in Japan to be aware of.
If a public holiday falls on a Sunday, then the next working day becomes a holiday. (This explains the substitute holiday in May 2020 during Golden Week.)
A day that falls between two other national holidays also becomes a holiday.

Celebrating the first day of the new year (元日, がんじつ), isn’t something unique to Japan. People make wishes for health and luck in the new year and spend time with their families.

Japan used to celebrate New Year’s Day according to the lunisolar calendar, in late January or early February. This practice, called “Lunar New Year” or “Chinese New Year” is still being continued in countries such as China, Korea, and Vietnam. Japan, however, changed the date of its New Year’s Celebrations to January 1st on the (solar) Gregorian Calendar in 1872.

Only the 1st is an official national holiday. However, many workplaces don’t open again until January 3rd.

In Japan, young people officially enter adulthood at the age of 20. The Coming of Age Day (成人の日, せいじんのひ) was put in place in 1948 to celebrate them “becoming aware of reaching maturity and striving to live independently” (according to the wording of the law).

Since the holiday is in January, most of whom the holiday is celebrated for haven’t turned 20 yet when it is held. Many young women wear ornate furisode kimonos for the occasion. Men can sometimes be seen sporting a traditional haori and hakama combination, but many wear a formal suit nowadays.

The holiday is celebrated on each January’s 2nd Monday.

Most countries that celebrate a similar holiday do so on dates that correspond to the foundation of their current, modern nation-state (e.g. as a result of independence from another country). However, Japan is an outlier. Instead of a concrete political event, the date is based on the ascension to the throne of the mythological emperor Jimmu (allegedly) around 660 BC.

This holiday was first put into place during the Meiji period and used to be called 紀元節 (きげんせつ) until 1948.

As the name already says, this holiday celebrates the birth of the (current) emperor. Until 2018, it fell on December 23rd, the birthday of Emperor Akihito. 2019, when the Heisei era ended and the Reiwa era begun, was the first year in over three decades without an Emperor’s Birthday holiday (天皇誕生日, てんのうたんじょうび).

From 2020 onwards, the holiday is celebrated on the birthday of new Emperor Naruhito – February 23rd.

The vernal equinox marks one of the two times each year where day and night reach about the same length regardless of where you are on earth. The Japanese holiday for it is therefore aptly called “Vernal Equinox Day” (春分の日, しゅんぶんのひ).

Vernal Equinox Day is celebrated based on astronomical observations, usually on either March 20th or 21st each year.

Showa Day (昭和の日) on April 29th essentially is the renamed “Emperor’s Birthday” holiday dedicated to Emperor Showa (1926-1989). In its current form, the holiday is relatively new. It was put in place in 2007 when “Greenery Day” (its name until that point) was moved to a different date.

According to the text that declared it as a holiday, this day is intended for ”reflection on the tumultuous days and the (national) revival during the Showa period and thinking about the nation’s future”.

Called 憲法記念日（けんぽうきねんび）in Japanese, this day memorizes the promulgation of the most recent Japanese Constitution on May 3rd, 1947.

The constitution includes the famous Article 9, in which Japan renounces war as a sovereign right of the nation. This article has the dual characteristic of being both the source of a new national identity as well as a point of contention and endless debate. As a result, many events held on this day center around themes such as pacifism, democracy, and (recently) constitutional revision.

There are no particular events or traditions associated with Greenery Day （みどりの日, みどりのひ）. Originally, the date for the holiday was April 29th, the birthday of Emperor Showa. Greenery Day was put in place after the Emperor’s death to secure enough national holidays for “Golden Week”. Later, it was moved to May 4th, where it remains until today.

Officially, Greenery Day is the holiday where people think about nature and are thankful for its blessings.

This holiday’s tradition goes back to an event at the imperial court called Tango no Sekku (端午の節句, たんぐのせっく). That event involved May’s seasonal flower, the iris. Because one spelling of the Japanese word for iris (菖蒲, あやめ or しょうぶ) has the same pronunciation as the expression “valuing the martial” (尚武, しょうぶ), May 5th was traditionally celebrated as a boy’s holiday.

Nowadays, it has become a holiday for children (and families) in general. Colorful and eye-catching carp banners（鯉のぼり、こいのぼり） are flown in front of houses and other places around the day of its celebration.

Marine Day (海の日, うみのひ) usually falls on the third Monday of each July. However, in 2020 and 2021, this day receives a “special spot” because of the Tokyo Olympics.

Marine Day is another holiday that doesn’t have any particular tradition associated with it. It was put into place in 1995 to memorialize the blessings of the sea that let Japan prosper as an island nation, among other things.

Mountain Day (山の日, やまのひ) is the most recently established national holiday. It was put in place in 2016 and falls on the 11th of August. In 2020, it will be on the 10th instead (the day after the Olympics closing ceremony).

Mountain Day can be thought of as the pendant to Marine Day, as both days are intended for the celebration of the blessings of different natural environments.

Respect for the Aged Day

Japan is widely known as being the nation with the overall oldest population (after Monaco, but that place is so small it doesn’t really count). Seniority – the number of years someone has lived – has also long been a major factor of one’s social standing here. Therefore, it is only logical to have a holiday for respect toward the elderly (敬老の日, けいろうのひ).

This holiday commemorates all old people who have spent many years contributing to society. Many visit their parents or grandparents and spend the day with them. The holiday is celebrated on the 3rd Monday of September.

Just like its equivalent in the spring, the date of Autumnal Equinox Day (秋分の日, しゅうぶんのひ) is based on astronomical observations and usually falls on the 22nd or 23rd of September.

Health and Sports Day (体育の日, たいいくのひ) exists to remind the people of the meaning of sports as a means for a healthy mind, body, and lifestyle. In 2020, this holiday was officially renamed to just “Sports Day” (スポーツの日, スポーツのひ).

Normally, Health and Sports day is celebrated on the 2nd Monday of October. Similar to Marine Day, however, for 2020 and 2021 it was moved up to July because of the Tokyo Olympics. Two years in a row without a national holiday in October – bummer!

November 3rd is both the birthday of Emperor Meiji as well as the day of the promulgation of Japan’s very first constitution. Since 1948, it is officially called Culture Day (文化の日, ぶんかのひ) and is intended to commemorate the meaning of freedom, peace, and the arts. This makes sense since one of many well-known slogans of Emperor Meiji’s reign was “civilization and enlightenment” （文明開化, ぶんめいかいか）.

This holiday exists to reflect on the meaning of labor for the preservation of society and for the people to thank each other for their hard work.

Labor Thanksgiving Day (勤労感謝の日, きんろうかんしゃのひ) is celebrated on the 23rd of November. While the date itself has no specific meaning, the holiday was originally connected to a traditional rice-harvest ceremony performed by the emperor (新嘗祭, にいなめさい). Its name was changed in 1948 to reflect changes in Japan’s national structure (where the emperor is only a symbol and holds no political power).

The good thing about holiday seasons in Japan is that they’re fairly easy to plan for. After all, they fall on the same day for everyone and the specific dates/vacation periods are often announced well in advance.

However, if you want to go to famous tourist spots, prepare for exciting activities such as shouldering your way through crowds, standing in line a lot, and paying a premium for accommodation. When everyone is traveling at the same time, there’s no way around most of these things.

This holiday season features the longest string of official national holidays. Depending on what weekdays the national holidays happen to fall on, Golden Week can become quite long for Japanese standards. Many use some of their paid leave days to fill gaps in between the national holidays (if they aren’t encouraged to do so by their employer anyway). This practice usually nets people around 7-8 days of vacation.

Since Golden Week is the one main holiday season without a strong traditional aspect to it, many use it for travel within or outside of Japan. Of course, this also means lots of crowded roads and tourist spots. When I talked to some colleagues about plans this year, some of them said they would just stay at home to avoid all the fuss. Looking at some polls, it seems like this attitude is pretty widespread.

READ ON  More about Golden Week

This holiday season is centered around the Bon Festival (お盆, おぼん) during which ancestor spirits are believed to visit their still-living relatives. The name for the festival, by the way, means “tray” or “flat bowl”. It’s an abbreviated form of 盂蘭盆会（うらぼんかい), a ritual in which offerings are given to the ancestors.

Because of the traditional and family-centered nature of the holiday, many Japanese return to their home towns (帰省, きせい). As a result, the crowds may not be as bad as during Golden Week, but you can still expect more tourists than usual if you go to places like Kyoto or Hakone.

The majority of companies allow their employees a relatively long vacation period around 4-5 days (which, just like Golden Week, is often expanded using weekends and paid leave).

Japanese New Year is another family-centered holiday where most Japanese return to their hometown to celebrate with their parents, grandparents, siblings and other relatives.

While the season only features one national holiday, average vacation length is around 6 days. Most companies are shut between December 30th and January 3rd. While there certainly is no shortage of hotels, shops and restaurants that operate year-round (年中無休, ねんじゅうむきゅう), some smaller services, spots or shops may be closed during New Year’s. So make sure to check beforehand if you’re traveling during this period.

While it’s pretty likely that your total vacation time will be lower in Japan than in your home country, you can still get to a decent amount if you plan your paid leave days well. If you’ve already come to Japan a few times and have seen the big tourist spots, I’d recommend looking for lesser-known and lesser-frequented places to check out!

How to pray at a Japanese Shrine
May Sickness: A Japanese Phenomenon
What you need to know about Golden Week
Share
culture

Employee Benefits at Japanese Companies
IT Jobs in Japan for Foreigners
Learning how to code while working in Japan
Language and Communication Skills for the Japanese...
Sleeping at Work in Japan – Myth of the Hard...