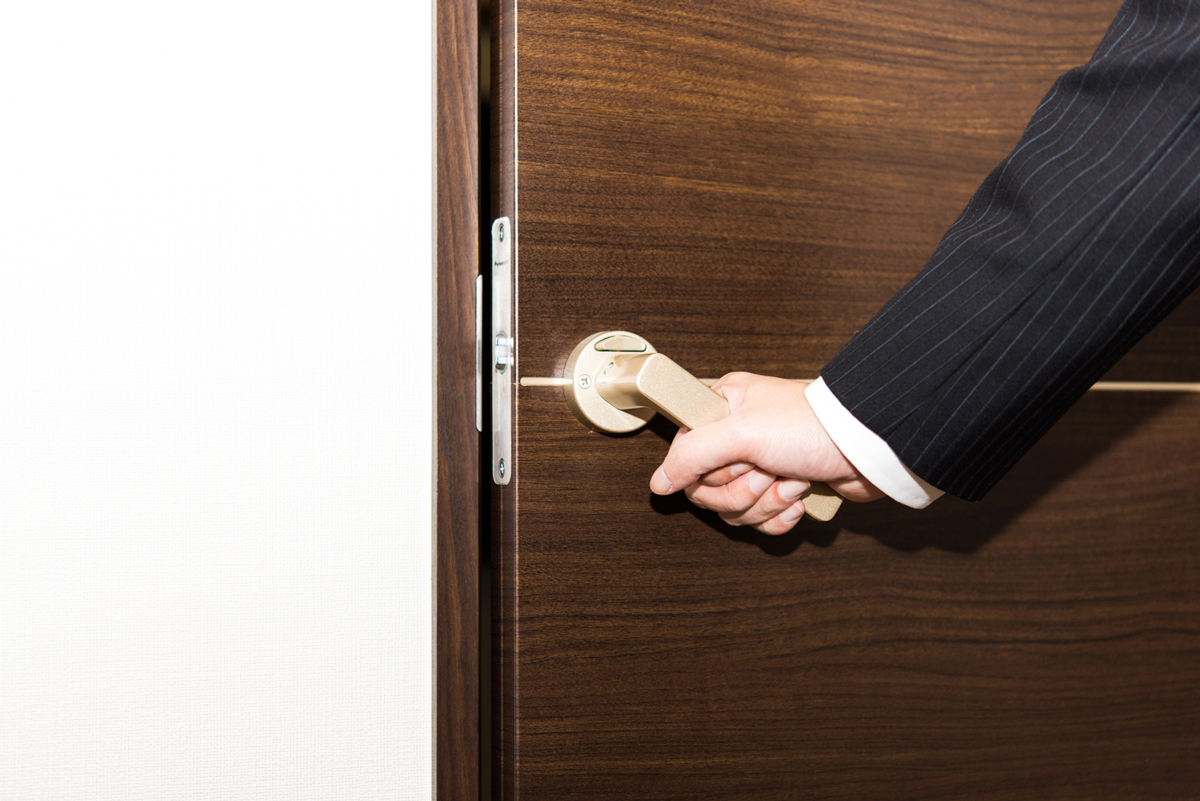 Knocking on the door, how hard can it be? Did you know that some people in Japan failed their job interviews before they even entered the room?
Why? They did not know how to knock correctly!

A seemingly small thing like not knocking the correct number of times can lead to various misunderstandings. Not knocking at all is even worse. Opening a door without knocking first shows a lack of respect for the other person. Especially in business situations, knocking before opening a closed door is essential!

The Japanese rules on how often to knock are said to be based on international standards (which I have never heard about before coming to Japan).
In these international rules, meaning is attached to knocking 2, 3 and 4 times in the following way:

Regardless of this straightforward system, the Japanese rules for knocking are slightly different. To respectfully enter a room, you need to consider a few more aspects, which I laid out in the next section.

A job interview is a business encounter, so knocking three times before opening a closed door to an office or meeting room.
When instructed to enter, do not touch the handle but knock exactly three times.

Make sure it is loud enough so it can be heard, but avoid knocking too strongly, since that might leave a bad impression with the people on the other side of the door.

After knocking, wait until you hear 「どうぞ」. Interviewers often sit far away from the door, so listen closely.
Upon hearing the cue, open the door, saying 「いたします。」Speak with a clear and friendly voice. Close the door behind you without making a noise and say「いたします。」once more.

What to look out for

Why not four times?

According to international standards, knocking four times, not only three times, is correct in a business situation.

Asking Japanese people, many will tell you that knocking four times seems weird to them, because they think it is too much. That is why knocking three times became the business standard in Japan.

Japanese people knock twice when checking if a bathroom is empty. Knocking twice is rude and should be avoided at all cost in business situations.

No tradition of knocking

Japanese architecture traditionally comes with thin sliding doors, which made knocking unnecessary. One could hear the person approaching from inside the room. If someone wanted to announce themselves, they could just say something.

It is only with the spread of “western style rooms” and the modern office culture that knocking was introduced to Japan on a large scale.

In a way this makes Japanese knocking rules something foreign for both Japanese and non-Japanese alike. Even today knocking manner is still something Japanese people frequently mix up. Many Japanese people knock twice on most occasions. Therefore, do not be surprised when you see someone knocking twice at an office door. Avoid repeating their mistake and stick to three times in all situations outside the bathroom and you will be fine!

What do you think about these rules telling you how often to knock at a door? Is it something that is common in your country as well?

4 Japanese Business Greetings you need to know
The Simple Art of Exchanging Business Cards in J...
Business Casual – Guide to Choosing the ri...
Bowing in Japan: The Right Bow for Every Occasio...
Share
job interview

Female Engineers in Japan
How to Work in Japan Without Speaking Japanese
Practical Japanese – Tips from Company Train...
Working in Japan: Adapt & Keep an Open Mind
Are you doing all you can to find the perfect job?