Japanese Pronunciation and How to Practice with Karaoke 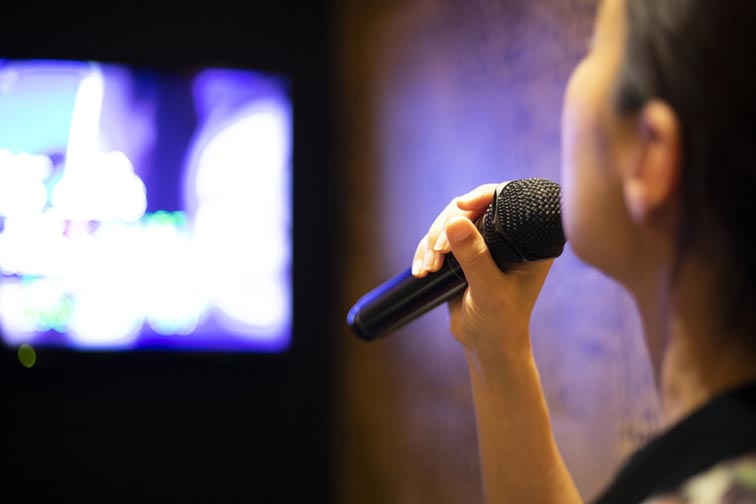 Getting an (almost) native-level accent in Japanese is impossible? Not if you know what to look out for and combine different ways to practice. Learn how to make your Japanese sound more natural using the below methods.

The first step to great pronunciation is getting the individual Japanese sounds right. Of course, you don’t have to achieve 100% perfection before you move on to the other exercises, but having a solid foundation is important. I won’t go into depth about this topic since this article is intended for intermediate-level readers. If you’re interested, check out some pronunciation guides.

Once you’ve got the fundamentals down, you can start to mix and combine them in voice training exercises. Below is a well-known example:

This is then repeated for every Hiragana “line”, e.g. かきくけこ, さしすせそ, etc. Pay attention to how you move your lips and pronounce the sounds as clearly as possible. Here’s the full transcription for this exercise.

If you’re already at the advanced level, practicing like this may make you feel like you’re going back to the beginning. Well, in a way, you are. But these types of exercises are also used by aspiring voice actors and radio/TV presenters, so don’t let that weigh you down.

Another basic, but useful pronunciation practice is “The Water Strider Song” (あめんぼの歌, あめんぼのうた). During my university year abroad in Kyoto, I joined the student broadcasting club, where we often used it for voice training. Although it is called a “song”, it doesn’t come with a melody – you just read it out loud. You can find the full text (with furigana) on Wikisource. For spoken examples, YouTube is your friend.

Now let’s move to the more advanced stuff. Remember though: That you’ve progressed to this stage doesn’t mean that you never have to practice the basics again (especially if you’re not living in Japan and are not speaking it daily). Mix and match exercises for good results.

Tongue twisters are useful for training articulation (滑舌, かつぜつ). Of course, you can also always just use them to impress your Japanese friends.

A typical tongue twister contains many syllables with similar pronunciation. The goal is, as one would expect, to say these sentences as fast as possible and in rapid succession without tripping up. If you do it properly, practicing with tongue twisters will make your Japanese sound clearer and make it easier to understand.

Here are a few examples, ranging from easy to difficult. Try them out!

This one can be lengthened to バスガス爆発ブスバスガイド（バスガスばくはつブスバスガイド）, meaning “the ugly bus gas explosion bus guide”.

It means “The president of the Tokyo Patent Approval Agency hurriedly refuses the approval of vacation today”.

By the way: “Tokyo Patent Approval Agency” may sound like a real place, but it doesn’t actually exist (and never has).

At my university, we had irregular, short phonetics classes taught by a Japanese opera singer. That’s where I first came in contact with the concept of pitch accent and sentence melody in Japanese.

Although many at the intermediate know that rain (雨, あめ) and candy (飴, あめ) sound different in Japanese, most don’t bother too much with pitch accent because “people will understand you anyway”. While it is true that Japanese is still comprehensible when you don’t hit the right accents, even just getting the basics down will make your speech sound a lot more natural.

To look up the pitch accent for individual words and even short phrases or sentences, Prosody Tutor Suzuki-kun (made by Tokyo University researchers) is a very useful tool. The most in-depth online lessons on the topic are provided by a guy called Dogen (here’s an overview of his lessons).

Aside from taking lessons on the topic, another way to acquire a natural and native-sounding accent is to listen a lot and actively, as well as repeat what you hear. The next two sections will deal with those things.

This is a passive training technique. Whenever you’re doing household chores, commuting, or doing other “mindless” tasks, consider combining it with radio or podcast listening practice.

In middle school, I used to listen to the BBC World Service every day when my mother drove me to school. Of course, that didn’t make me able to speak English all of sudden, but it still gave me a general idea of how people talked.

Most of the stations offer a fairly standard mix of music, news, talk segments, and ads – a lot of ads. To my knowledge, there isn’t a station that’s just news or talk without much music or advertisements, whenever you tune in, all the time.

If you’re in Japan, you can use Radiko – the main internet radio provider here. Sadly, their services aren’t available for people living outside of Japan. However, there is another app called Radio Cloud (ラジオクラウド), which comes without regional restrictions. You have to create an account first, but you can use your Google, Twitter or Facebook accounts for easy login. So, it doesn’t have to be a hassle if you don’t want it to be.

Another fairly new option is Spoon (スプーン), a “radio for everyone” where users stream shows by recording themselves. I haven’t tried it out yet, but I could see it being a good way to hear some “authentic, everyday” voices.

Shadowing is listening practice combined with an active element. Instead of just listening to what is being said, you first listen and then try to replicate exactly what you heard. It’s the “repeat after me” routine, but you decide who your teacher is.

With shadowing, repetition is key. Don’t be satisfied when you “kind of get there” on the first try. Listen and repeat again and again until you get the feeling that you’ve come close to the original voice. Japanese Youtube videos, podcasts and radio apps (ideally with a 5-10 second rewind feature) and even anime are useful material for this kind of practice.

Of course, before anything else, you’ll have to be able to keep up with the lyrics and get the general pronunciation right. After that, however, try copying the voice of the original singer as closely as possible, mimicking every little thing.

Each singer and vocalist has their own style, so depending on what kind of artists you choose, their pronunciation may be quite off from “standard classroom Japanese”. So, don’t go overboard when trying to apply what you’ve learned. For example, I wouldn’t advise you to use Shiina Ringo’s rolled R in everyday situations, unless you want your friends to think that you recently joined the mafia.

However, even if the styles you copy may not be useful for everyday conversation, shadowing in Karaoke can help you understand the finer nuances of pronunciation, word flow, and language melody.

I’d say you get the best results if you practice with a wide variety of songs from different artists and genres. You don’t have to go to a Japanese Karaoke box for that – there are many Karaoke versions of popular songs online.
You’ll be able to find a lot of practice material by searching for “[band or song name] カラオケ” on Youtube.

When you’re practicing on your own, you can never be 100% sure whether you’re “getting it right” or not. If you’ve been practicing a lot and are still not satisfied with the results, consider taking lessons or going to Japan. A teacher will be able to pinpoint the problems you have and being truly immersed in a Japanese environment will help you to naturally absorb the language.

Ideally, you could combine both by learning Japanese in Japan. You could always do a year abroad at university or a working holiday, but if you want to focus on your language abilities, a Japanese school is the way to go.

RECOMMENDED  The full package: Japanese classes and job hunting preparation in one

If you don’t have the opportunity to come to Japan, try finding a Japanese practice partner. Many universities have systems dedicated to language exchange between students and international visitors.

Japanese – and especially younger people – tend to not be too harsh on foreigners when it comes to language abilities. When you get complimented on your Japanese after only having said hello, don’t let that get to your head – it’s an act of courtesy, nothing more.

When practicing with your partner, be sure to make clear that you want to train your pronunciation. Exchange students aren’t trained professionals, so they might not be able to correct every mistake you make but encouraging them to point out times when you “sound weird” can help.

While it may not be possible to achieve true native-level pronunciation unless you grow up with a language, practice can still go a long way. At the very least, you’ll be able to smooth out the biggest issues and make your Japanese easier to understand. Try some practice methods, start with the one that seems most interesting or fun and go from there.

The 5 most important everyday expressions at the...
Five reasons for using an electronic dictionary ...
5 Pillars of Japanese Manners
Taking JLPT N2 and N1 – Study Tips
Share

Daily Reports – Information Sharing at Japan...
May Sickness: A Japanese Phenomenon
Internships for International Students in Japan
Shokumukeirekisho – How to write that other ...
The right visa for your stay in Japan

Quick Guide on How to Call Companies
Guide to getting your Internet plan for Japan
Credit Cards in Japan and How to Get One
How to choose: Suica or Pasmo card
Jobs in Japan: Use your time well and keep on goin...