Areas with Cheap Rent in Tokyo 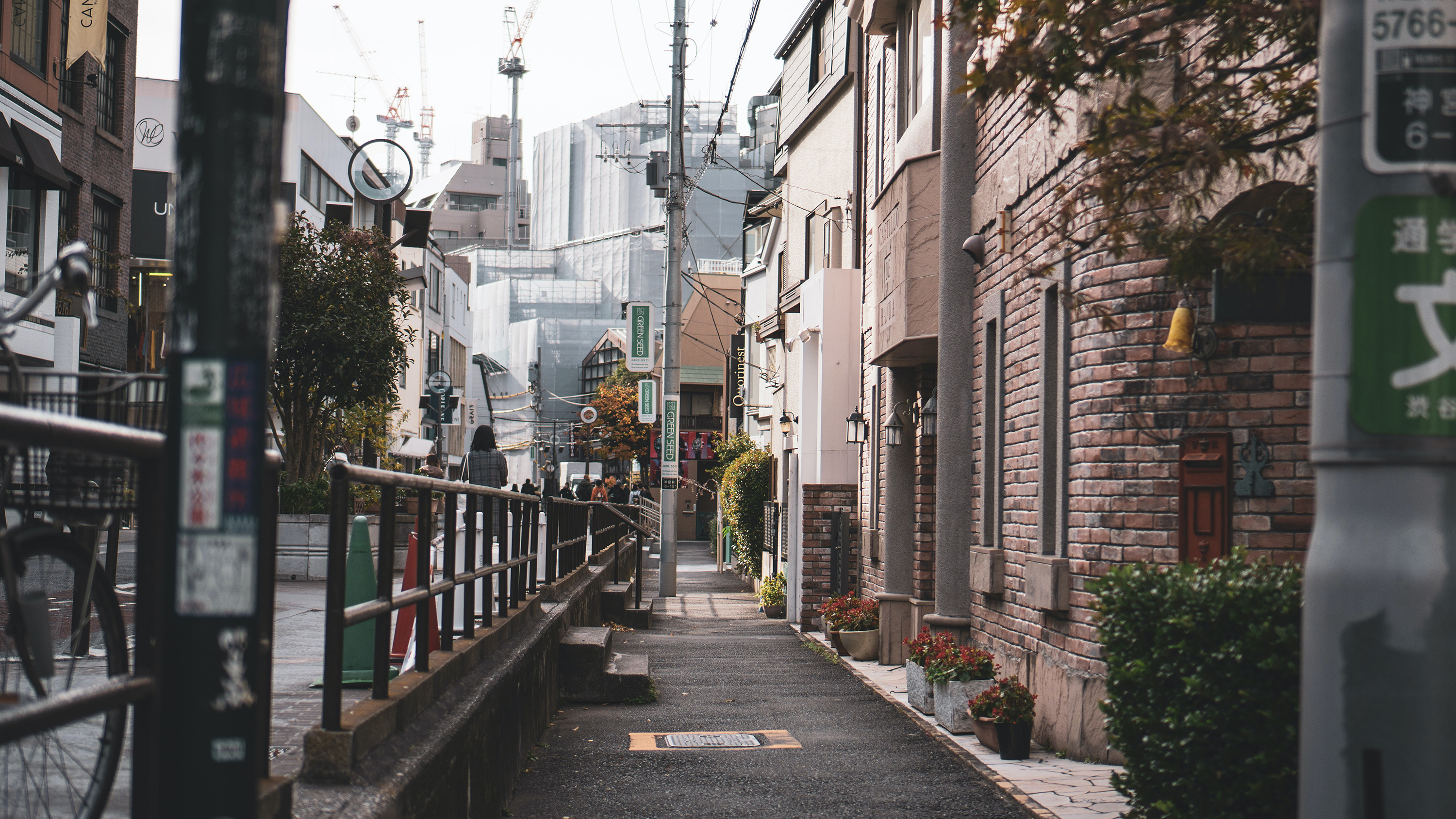 Tokyo is an expensive city to live in, especially when you’re just starting out. Where should you look if you want to find a cheap place to live that’s also close to all the action? We looked at data from one of Japan’s largest real estate portals.

For this article, we looked at the average monthly rent for one-room apartments listed on Suumo, one of Japan’s biggest real estate and apartment renting portals. An apartment isn’t the only choice – share houses have been increasing in popularity, even among young Japanese. But if you want your own place, a one-room apartment is probably the best option.

READ ON  Apartment, Share House and Co. – Housing in Japan

Of course, the numbers we’ll show here can only serve as a pointer of sorts. Many other factors influence how high the rent for any given apartment is – room size, distance from the nearest station, age of the building, bathroom and kitchen layout, etc.

In most cases, you will have to pay more than the average price, because the average includes a bunch of not very desirable options (for example, there are many old one-room apartments with no shower or bathtub, only a toilet). Still, the numbers should give you a general idea of where to search if you want to live cheaply in one of the world’s most expensive cities.

When looking for apartments, you should be looking for places that will not cost more than one-third of your income. For example, if you’re making 250,000 JPY a month as a fresh graduate, it’s best to look for apartments below 83,000 JPY. Lifestyles differ, but one-third is generally considered a “safe line” in Japan. It’s probably best to also factor in utilities like electricity, water, internet and heating costs. For more info, check out this article.

First, let’s have a look at Tokyo’s 23 wards, the core of the Tokyo metropolis. Rent here is mostly higher when compared to the surrounding prefectures but living here comes with its benefits – the biggest one being easy and fast access to the city center. 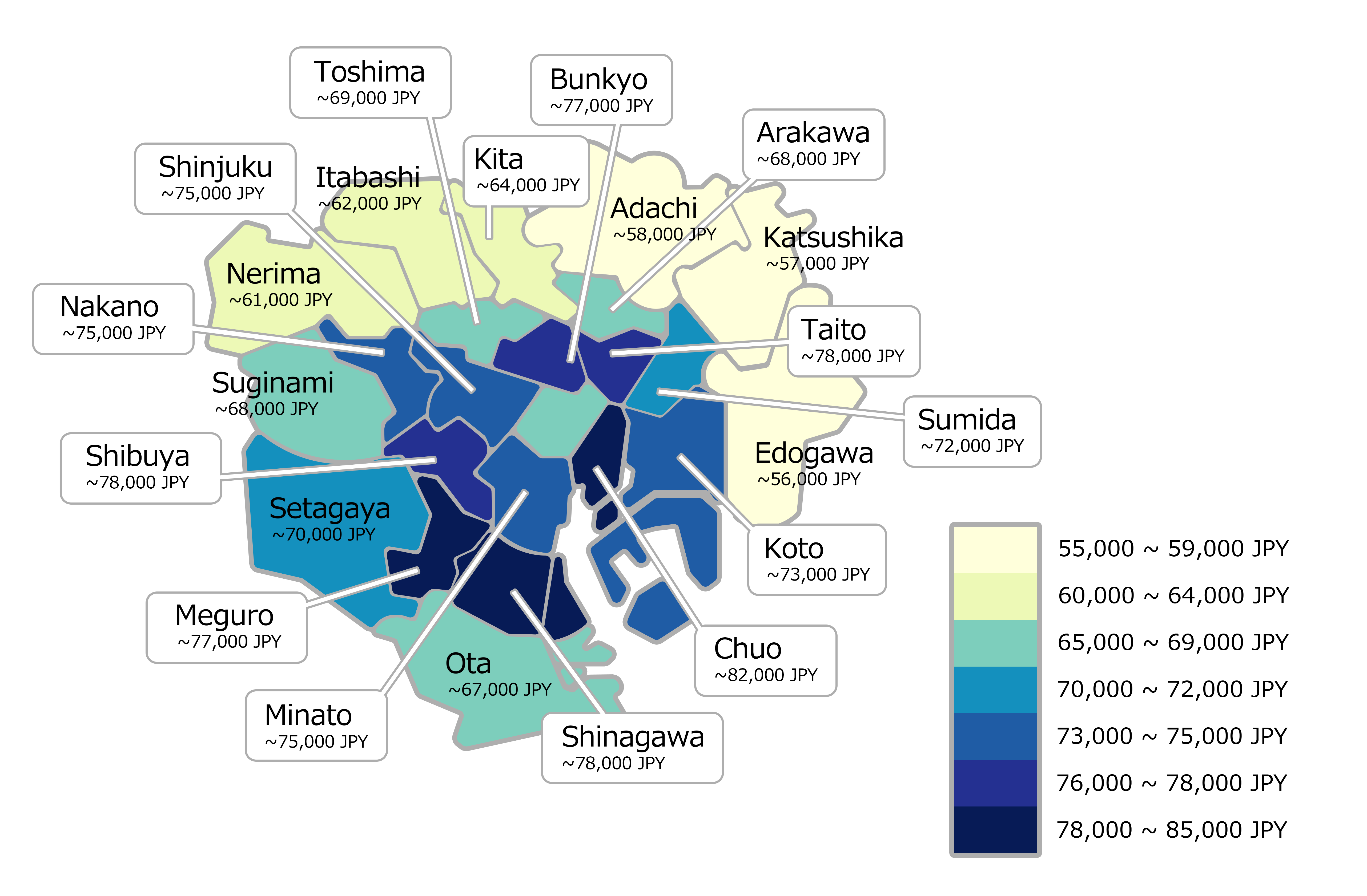 The results here are not exactly surprising. The wards bordering the less urban parts of Tokyo as well as the rural prefectures of Saitama and Chiba have the cheapest rents. Edogawa ward makes it to the top of the list, with an average rent of only 56,000 JPY. In the southwest, rents are a bit higher because of the proximity of these areas to Yokohama, etc.

The (North-)East VS (South-)West divide has existed for a long time in Tokyo’s history. In premodern days, the general area that is now the Meguro, Shibuya, Suginami, Minato and Shinjuku wards was called “Yamanote” (山の手, やまのて). Samurai retainers and other fancy folks resided here. In contrast, the area near and east of the Arakawa river was known as “Shitamachi” (下町, したまち), the part of the city where “ordinary people” like merchants and artisans lived.

Century-spanning urban sprawl has muddled these categories a bit, but they still reflect themselves in things such as rent or land prices and even everyday speech. While most associate “Yamanote” with a train line nowadays, “Shitamachi” is still widely used when referring to the eastern wards.

Below, you can find a short introduction to the “Top 10” wards with the cheapest rents.

Edogawa ward is named after the river that forms its north-eastern boundary. It’s Tokyo’s 4th biggest ward and has the highest “public park area to inhabitant” ratio of all of them. Rent is lowest in the relatively big northern area between the Sobu and Toei Shinjuku Lines, where walking to the nearest station will take you about 30 minutes. You can compensate by covering the distance with a bike or taking a bus.

Edogawa is also known for its sizeable Indian community in the Nishi Kasai area, where you can find all kinds of restaurants offering Indian cuisine. Coincidentally, it’s also the home of Puranik Yogendra (known as Yogi), Tokyo’s first-ever ward assemblyman without Japanese roots.

One reason for the relatively low rents in this district is that only the Sobu line offers a direct connection to business districts like Shinjuku. However, it only runs through the ward at its very southern edge, in the area around Shin-Koiwa station. The two Keisei lines connect with the central network at Nippori and Ueno, from which you can take the Yamanote, Hibiya and Yurakucho lines for access to all the important destinations in the city center.

From mid to late July, residents and visitors can enjoy the blooming irises in Horikawa-Shobu-en.

The liveliest part of Adachi ward is the Kita-Senju area in the south, which also functions as a public transportation hub. This area has a long history as a meeting point of two old trading routes.

Adachi is another large ward, and especially its northern area is not as well connected to the transportation network as some of the others. Similar to Edogawa ward, at the farthest points, walking to the nearest station will take around 30 minutes.

If you’re OK with changing trains on your way to work, The Nippori-Toneri Liner and Tobu-Isesaki Line running through the cheaper areas are still a decent choice. Just like Katsushika ward, they connect to the Nippori and Ueno, where you can change to the major Yamanote, Chiyoda, and Hibiya lines.

Rent increases the closer you get to Nerima station. For cheaper apartments, search alongside the Seibu Ikebukuro Line in the western part of the ward. You can either stay on it and get off in Ikebukuro or change at Nerima and get on the Oedo line, which takes you to the Shinjuku business district.

For leisure activities, Nerima offers the spacious Hikarigaoka and Shakujii-Koen parks. Until very recently, it was also home to the amusement park Toshima-en, which closed in 2019 and will be turned into a Harry Potter theme park based on the Warner Bros. Studio Tour in London (scheduled to open in 2023).

Fun fact: Nerima also has major connections to the animation industry. Studio Toei’s headquarters, where the original “Astro Boy” series (1985) was created, is located here. In total, there are over 100 companies in Nerima ward that are somehow connected to animation. It’s also the setting of anime series multiple anime series, like Ranma 1/2 and Urusei Yatsura.

The areas that are cheapest while still being in reasonable walking distance to public transportation are located on the ward‘s western edge, around the Nishi-Takashimadaira, Shin-Takashimadaira (both Mita Line) and Chikatesu-Narimasu (Fukutoshin Line) stations.

The Keihin Tohoku and Saikyo lines provide you with direct access to Tokyo’s two main business areas (Shinjuku and Marunouchi). The stations with the cheapest apartments close to them are Ukima-Funado and Kita-Akahane, both on the Saikyo Line near the Arakawa river.

Ota, bordering the city of Kawasaki on the south, is one of the few “cheaper” districts in south-western Tokyo. Haneda airport is located here. If you’re planning on visiting your home country often during your stay in Japan, choosing an apartment here might be worth considering.

The places with the cheapest rents can be found in its southern area, alongside the Keikyu Main and Airport lines. Search in the vicinity of the Zoshiki, Kojiya, and Rokugodote stations.

Due to redevelopment, the area around Minami-Senju has higher average rents. For lower prices, look around Machiya station and the areas along the local Toden Arakawa tram line. With Nippori (on the Yamanote Line) and Oji stations being close, accessing popular parts of Tokyo are easily accessible even from the cheaper areas.

Surrounding Minowabashi station is an “old-school” type of neighborhood with a classic Shitamachi atmosphere. Exploring this area will make you feel like you went a few decades back in time.

The cheapest apartments here can be found around the Kugayama and Fujimigaoka stations as well as Kami-Igusa station in the north (Seibu Shinjuku Line).

The Koenji area on the Chuo/Sobu line is popular with college students and other people in their 20s, with a similar vibe to Shimo-Kitazawa. Think of a lot of used clothing stores, live music venues, cafés and relatively cheap places to have a drink.

Compared to the other “cheaper” wards, Toshima features an excellent connection to all areas of inner Tokyo, mostly because it has the JR Yamanote Line running through it. However, that also pushes the rents a bit.

Ikebukuro station is the main hub of this area. It’s known as an area with a high density of residents with Chinese roots is and thus sometimes called Tokyo’s “new” (or “true”) Chinatown. The historical Chinatown is located in Yokohama, but has become very tourist-oriented and – some might say – unauthentic.

Aside from many big and popular stores like Bic Camera, Nitori (Japan’s IKEA), and Muji, Ikebukuro features Sunshine 60, one of Tokyo’s oldest Skyscrapers, (which also houses an aquarium and a planetarium). If you’re an anime or manga fan, you can also check out the nearby big Animate and smaller doujinshi stores.

If you want to be close to the hustle and bustle of central Tokyo while still saving some money, look for apartments in the eastern or northern wards. That being said, many apartments in the 23 wards area are still priced pretty high. If you’re fine with longer commuting times, searching for a place in Saitama, Chiba or the countryside part of Tokyo is the way to go. In the future, we’re going to add info about these places to this page as well!

Employee Benefits at Japanese Companies
How to Work in Japan Without Speaking Japanese
Sleeping at Work in Japan – Myth of the Hard...
Japanese Typing Test – Unannounced at the Jo...
Job Placement Service for IT Engineers

Japanese Group Interviews – How to Stand Out...
Yaaay: A new platform for finding your IT job in J...
IT Jobs in Japan for Humanities Majors
3 Essentials for a Successful Career in Japan
Thoughts on Success in Japan