Five reasons for using an electronic dictionary in 2020 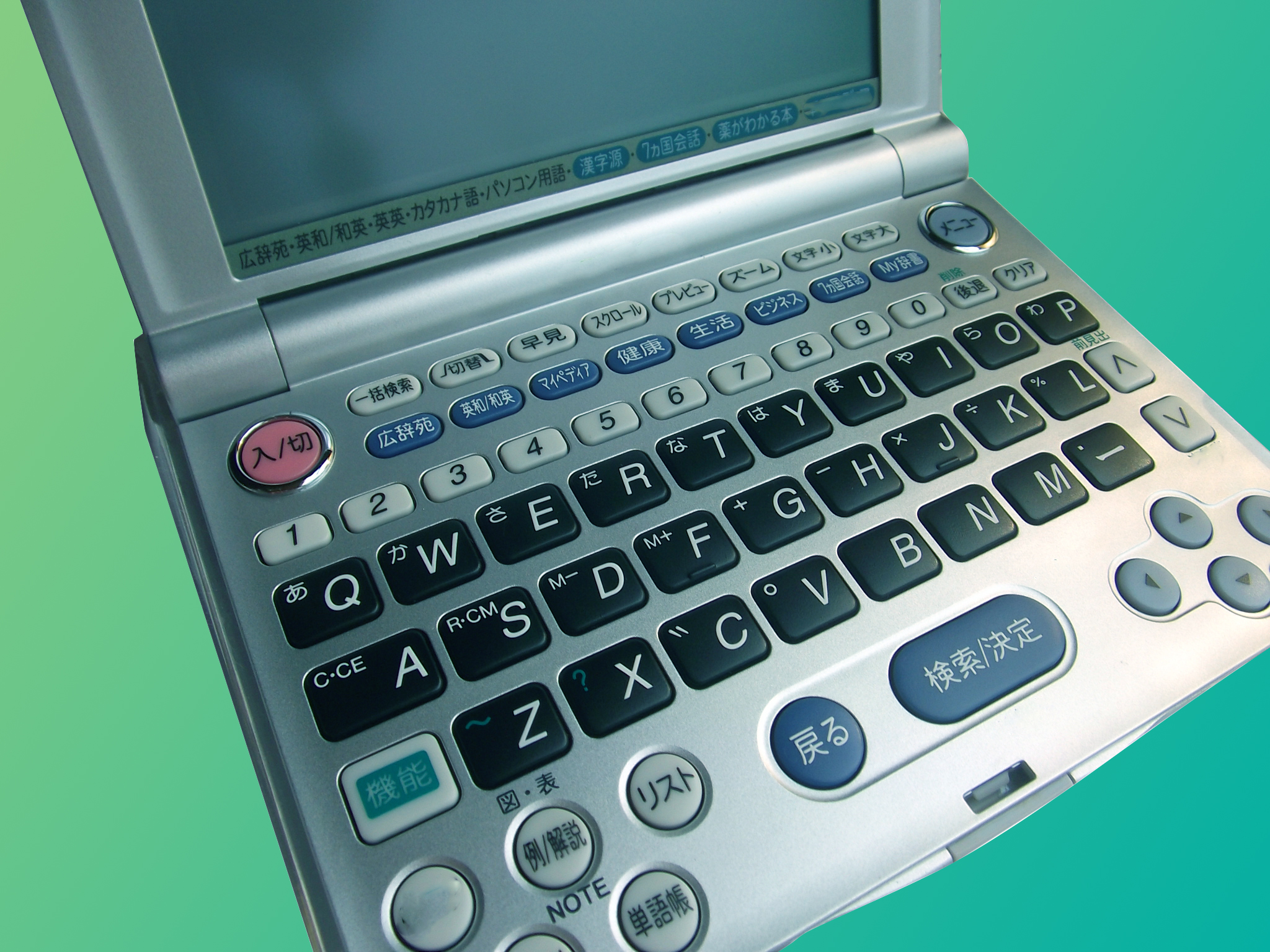 Electronic dictionaries seem a bit out of place in the age of smartphones and unlimited internet access. However, even in 2020, they still have their upsides if you are learning Japanese. We listed five of them.

What is an electronic dictionary?

An electronic dictionary – or Denshi Jisho (電子辞書) in Japanese – is a portable device resembling a small laptop. As you can probably already tell by the name, it is used just like a traditional paper dictionary, to look up words you don’t know. Japanese mostly use it for studying English. However, it’s also a useful tool for Japanese learners.

Of course, there are good reasons why electronic dictionaries have been going out of fashion. The first and most obvious one is that it’s a separate device – an extra thing that you have to carry around. Why get a Denshi Jisho when you have 24/7 internet access on your smartphone?

Another thing is that despite being less comfortable to handle in general, an electronic dictionary will cost you extra money. On the other hand, there is no shortage of completely free Japanese dictionary apps like Imiwa and Makimono. Some of them even feature working Kanji writing recognition. In that case, is a purchase really worth it?

While you can’t ignore the cons, electronic dictionaries do have their pros. I used a Denshi Jisho for most of my time in university, so I know from experience. Let’s go over the things that make them a surprisingly good study tool even in 2020.

Depending on what model you choose, you can also get access to a bunch of other material with varying levels of usefulness (I remember mine having separate dictionaries for onomatopoeia, single kanji, pitch accent, classical Japanese, and an encyclopedia for wild Japanese birds, among others).

I found that my lookup speed was a bit faster when using the Denshi Jisho. Yes, tapping something into the search bar on your smartphone doesn’t take that long either, but at least for me, using a physical mini-keyboard was easier.

Also, because you can switch through the different dictionaries with the touch of a button, you have a very easy time cross-referencing. Dictionary apps or pages usually only give you one results page, and if you want to check another source, you have to open another app or go to another website. Which takes us to the next point…

This is arguably one of the most useful Denshi Jisho functions. It enables you to still train your Japanese even when you’re looking things up. It may not sound like much, but let show you why I think it’s important.

A huge factor of becoming fluent in any language is acquiring the ability to understand and use words and expressions intuitively. That means you have to remove the intermediate step of “translating” what you want to say from your native language into Japanese. In other words, the goal is to “think in Japanese”. One way of training for that skill is increasing your use of single-language dictionaries.

When encountering a new word, instead of opening Imiwa or copy-pasting it into the jisho.org search bar to search for its English equivalent, you can also google for [your word] + 辞書 (じしょ). The results take you to Japanese dictionary pages that explain the meaning of the word to you – in Japanese.

Of course, there’s always a certain chance that the Japanese dictionary explanation will contain another word that you don’t know yet. And if you search for that word, even more unknown words may pop up… and so on.

In the end, a simple word search can often lead you down a rabbit hole. But it is this act of understanding new things in the language you are learning that increases your ability to understand and use it intuitively.

While certainly not a difficult task in and of itself, opening new tabs and copy-pasting words over and over again can get annoying pretty fast – especially when you’re on your smartphone.

Using your Denshi Jisho’s “jump” function, however, you can just mark the word with the stylus – and the dictionary immediately takes you to the corresponding entry. This function makes exploring Japanese dictionary entries much more comfortable. I found myself using it a lot.

Unless you get the absolute cheapest models, most Denshi Jishos will come with a kind of touchpad or touchscreen where you can write unknown kanji that you don’t know the reading of. If you’ve got the general stroke order rules down, most of the time, doing so is faster than blindly trying out different readings or searching by radical.

This feature can also be found in quite a few smartphone apps. However, based on my personal experiences, those recognition functions often leave much to be desired.

In my final few years of university, students in lower semesters started to ask me if I could lend them my Denshi Jisho for upcoming tests. Naturally, smartphones were forbidden because they offered too much information when connected to the internet.

Electronic dictionaries, however, are just that – dictionaries in a digital format, not more and not less. That’s why they are sometimes allowed when taking Japanese tests at university or language school. It’s a small, but nice perk. Just a heads up though: You can’t use a Denshi Jisho when taking the JLPT.

This may be the single most important upside on this list – even more important than the “jump” function.

In an age where you can access the internet from almost anywhere, our attention spans are getting shorter. Sure, you can use your smartphone or laptop to study and look up words and grammar structures. But the same device that shows you these useful things also gives you the option to access social media … or watch funny pet videos … or play games…

Yes, owning a Denshi Jisho doesn’t suddenly make you unable to take out your phone and go to YouTube when you don’t feel like studying anymore. But for those that really want to study and find themselves always getting carried away too easily, removing access to both study tools and entertainment on the same device alone is very helpful.

Looking back, I think having a Denshi Jisho greatly helped me with reading in Japanese. When reading texts for class or books in my free time, I would always seek out a comfortable place. If I hadn’t had my electronic dictionary, I would have probably ended up wasting a lot more study time or “giving up” too early (at least more often than I did anyway).

So here you have them, the five reasons why I would recommend getting a Denshi Jisho even in 2020. Granted, their usefulness in work settings is pretty low, but as a study tool, they are great.

Now that we’ve gone through the perks, you really want a Denshi Jisho, right? Let’s have a short look at how much you’ll have to pay for one.

New products. Looking at the BIC Camera online shop for reference, electronic dictionaries get as cheap as around JPY 2,000. However, those are the barebones versions that almost seem like relics from ancient times, like the Casio WordTank. Simple ex-word models without a stylus and writing recognition range between JPY 5,000 and 6,000.

One step up, you get models aimed at Japanese middle and high schoolers (only J-J and J-E/E-J in terms of languages + extras and stylus). They cost between JPY 10,000 and 25,000. The Denshi Jisho I used belonged in this category. If you’re fluent in English, this is what I’d recommend.

Over JPY 30,000, you start getting into the specialty range. Included here are models that include dictionaries for other languages like French, Italian, German, Chinese or Korean (JPY 30,000 ~ 40,000) and then, at the very top, high-end models aimed at business people or medical students (up to JPY 80,000).

Second hand. Prices for second-hand prices can, of course, differ greatly depending on where you look. However, a quick search on the Japanese Amazon site took me to an older “Korean Model” (i.e. including a Korean-Japanese dictionary and hangul input) starting at JPY 13,800. I was also able to find “regular” ex-words (for middle- and high school use) at around JPY 6,000 in the Hard-Off Net Mall.

If you search around a bit, you can easily save JPY 10,000 and more. When I bought my Denshi Jisho at a big electronics store, I opted for an older, soon-to-be discontinued model that had a decent discount on it. It never caused me any problems during my studies.

In summary, I would recommend a Denshi Jisho to anyone interested in adding another level to their language learning immersion. In addition to training you to learn Japanese in Japanese, it also removes unnecessary distractions and helps with focused study.

Thanks to the relatively wide price spectrum, the abundance of model options and the availability of cheap second-hand choices, a Japanese electronic dictionary is definitely worth the getting for all kinds of learners.

5 Japanese Podcasts for Immersion (JLPT Level N3...
News from Japan #01
The 5 most important everyday expressions at the...
Japanese Pronunciation and How to Practice with ...
Share
learning toolsstudy methods

Online Applications: Get Your Dream Job in Japan
Engineering Internships in Japan
How to get a Job in Japan from India
How to prepare for the call from Human Resources
Taking JLPT N2 and N1 – Study Tips

How to Learn Business Japanese
Jobs in Japan: Use your time well and keep on goin...
5 Unexpected Things at Japanese Job Interviews
U-Turn and Relocation for a New Job
7 Tech Startups in Tokyo With English-Speaking Pos...