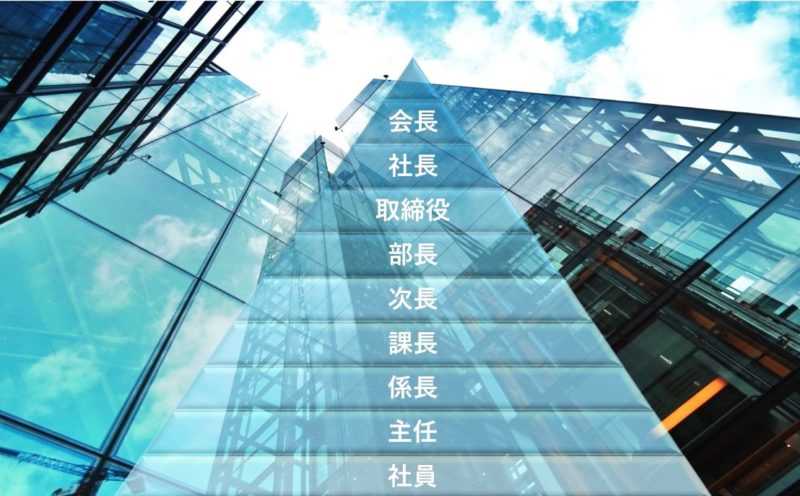 Taking your first steps in the Japanese business world and feeling overwhelmed by the corporate hierarchy? When starting my first job in Japan I tried looking them up, but they all seemed to vaguely translate to something like section or department manager… Here I share with you what I learned since then.

Why hierarchy matters (in Japan)

It’s hard to imagine a Japanese office where the structure and work culture isn’t dominated by the internal hierachy.

Be it in a meeting room, or an elevator, in business situations the seat or place of each person is decided by their standing in the hierarchical structure. This is not required at every firm, but when talking to a person from your company you might have to address them using their name and title, as in 田中課長 (Section manager Tanaka).

Failing to grasp the position of a person in the management hierarchy (役職, やくしょく) is disrespectful and may leave a bad impression. Further into the job, not understanding the place of everyone in the hierarchy at your company can cause confusion in who’s orders to follow and who to report to. To avoid such mistakes, I put together a list with the most common titles and their meaning.

Hierarchy from top to bottom

会長 (かいちょう): the owner of the company, who will often not participate in day-to-day business, but lead the company from behind the scenes.
Average age: 65, 43 years in the company
※The data is only intended as orientation. It is not a national average, but the typical age of people in these positions at Toyota to give you an idea.

社長 (しゃちょう): the face of the company, and the one making the final decisions in day to day activities.
Age: 60, 38 years in the company

取締役 (とりしまりゃく): responsible for the management of the company a as whole. He might also preside over a specific branch.
Age: 54, 31 years in the company

部長 (ぶちょう): The head of a department and most likely the highest-up you will see around on a daily basis.
Age: 44, 21 years in the company

次長 (じちょう): similar to the 部長 in that he typically is in a leading position in the department, but one rank below the 部長.
Age: 40, 17 years in the company (※estimate due to lack of data)

課長 (かちょう): leading one section within a department.
Age: 35, 13 years in the company

係長 (かかりちょう): usually in charge of a larger team.
Age: 32, 9 years in the company

主任 (しゅにん): someone with experience in what they are doing, and able to take a leadership role.
Age: 28, 5 years in the company

Nowadays, with English titles entering Japanese companies, the naming of positions in Japanese companies is getting increasingly diverse. While this development makes it easier for us foreigners to get an idea what everyone is doing, you will find that companies might use them in different ways or maybe even mix English and Japanese titles. In that case you can be sure that the Japanese people you start together with will be at least as confused as you yourself.

Promotions in Japan for a long time have been depended on years of service. The longer one worked for a company the higher the chances to get a promotion.

Nowadays more and more companies adapt merit-based promotion systems, promoting those that achieve results regardless of age or background.

The best way to learn about the hierarchy and promotion system in your company is to ask a coworker or superior. It is something even Japanese recruits are not taught, and asking will signal your interest in the company and in fitting in.

The Simple Art of Exchanging Business Cards in J...
Elevator Etiquette in Japan
Bowing in Japan: The Right Bow for Every Occasio...
Complete Guide to Nomikai
Share
manners

5 Unexpected Things at Japanese Job Interviews
Sleeping at Work in Japan – Myth of the Hard...
Getting a Mobile Phone in Japan – Long and S...
Caution! Avoid these Expressions in Formal Japanes...
10 Japanese words for busy work situations

Guide to Walk-in-interviews in Japan
Taking the Perfect Resume Picture in Japan –...
Japan’s Humid Summers: A Survival Guide
Bit Valley – Japan’s Silicon Valley
How to apply for a job in Japanese – Guide w...