Job hunting in Japan and the Coronavirus 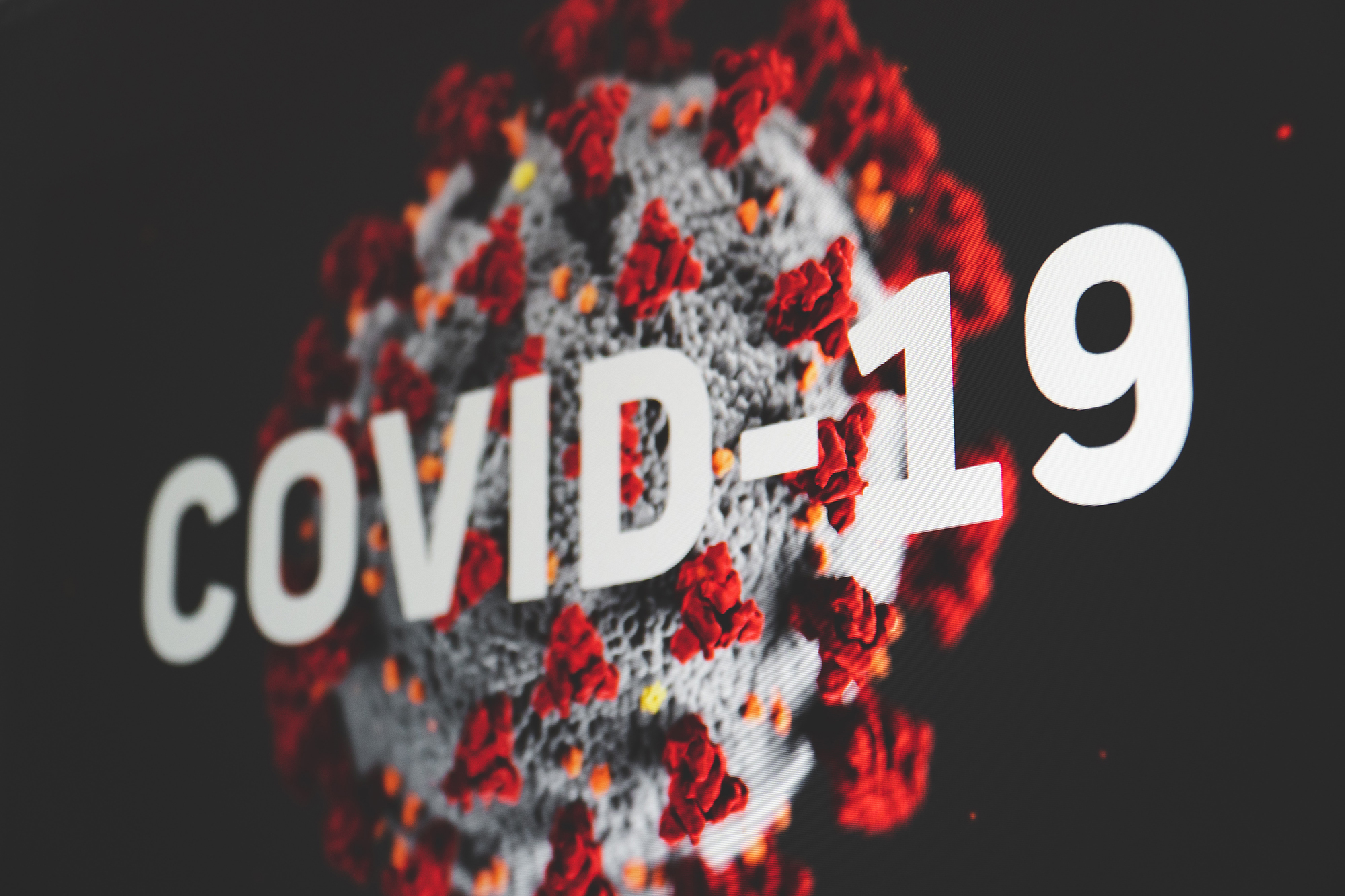 In 2020, the spread of Covid-19 brought big and sudden changes to the usual Japanese fresh graduate job hunt. Find out how job seekers were affected and what you can do in 2021.

Before going into detail about impact of Covid-19, let’s have a look at how things usually go.

Most Japanese students start preparing for their job search during their third year in university, doing company research and short-term internships during the summer and winter breaks.
The great yearly run for jobs then starts on March 1st, with companies on the big portal sites – Rikunabi and Mainavi – beginning to accept entry sheets (ES). March 1st is also the starting date of the big job fairs.

The next step begins in June 1st, when companies start doing job interviews. Unofficial job offers (内定, ないてい) start being given out around September.

READ ONShuukatsu – How Japanese students get their jobs

While this schedule has become less rigid in recent years, Japanese students still use these dates as a general guideline on when to do what. 2020, of course, brought a lot of confusion with it.

How Student Job-Hunters did in 2020

How was job-hunting in 2020 like compared to the previous years? And how visible was the impact of Covid-19?

The most widely-used metric to determine how well students of a certain age group are doing during their job hunt is the job offer rate (内定率, ないていりつ). This is the percentage of students who have received at least one job offer from a company, showing their overall rate of success.

Another important reference point is the job hunt activity rate (就職活動実施率, しゅうしょくかつどうじっしりつ). If a student continues with their job hunt after receiving a job offer, they might not be satisfied with what they have. Thus, more students continuing their job search until late into the year implies a worse job-hunting season.

Below, we’re going to have a look at the numbers for both Japanese and non-Japanese students.

On December 1st, 2021, the human resources giant Recruit released its latest update on the state of the job-hunting season. The numbers according to their survey (covering the answers from 1,263 students) are as follows: 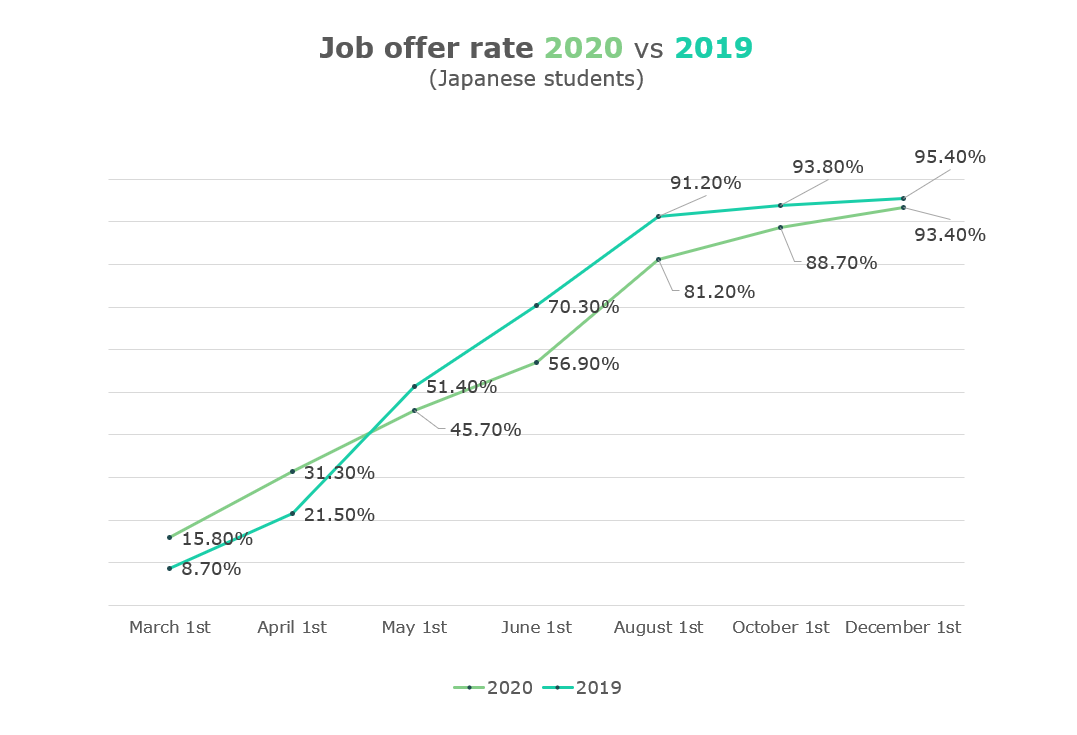 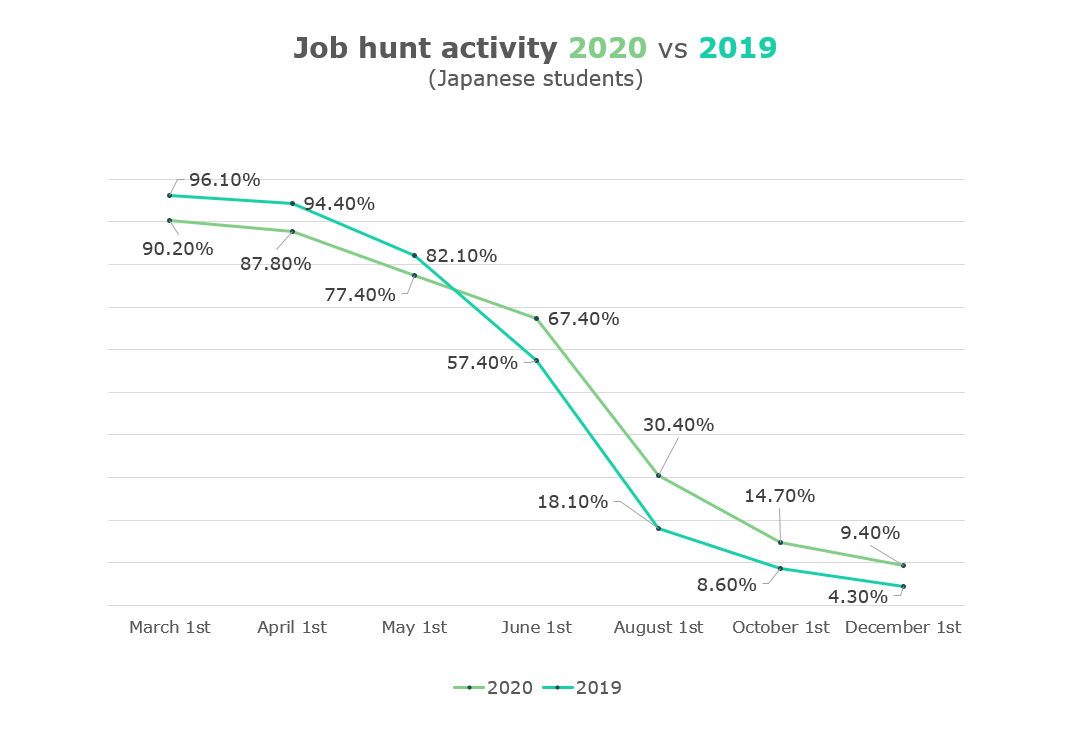 Looking at the data, 2020 numbers were better compared to 2019 in the early months (March-April). This could be attributed to companies giving out job offers to students that they “already knew” from internships etc. earlier than usual. Reduced opportunities for more interviews might’ve been part of the reason, but even before Covid-19, Japanese companies started shifting towards earlier recruitment.

In May, the trend started to shift, with both metrics falling below the 2019 numbers and staying there until the end of the year. In December, the job offer rate gap had almost closed. However, the 5% gap in job hunt activity shows that fewer students were satisfied with what they got.

Just like many probably expected, 2020 was a tough year for fresh graduate job hunters. But even under these harsh conditions, students who didn’t give up were still able to find employment by the end of the year.

Compared to Japanese students, there isn’t nearly as much widely available data on international students. One point of reference is a survey from the HR company DISCO from August 2020. According to this survey, only 31.5% of them had managed to secure a job offer by that time – nine points down from the 40.6% figure for August 2019.

At first sight, these numbers seem low. However, the results from the previous years (40.6% for 2019, 42.6% for 2018) show that the job offer rate for international students has been consistently lower. On the other hand, the actual gap in the job offer rate between 2019 and 2020 was about 10% for both Japanese and International students. So when put into perspective, International Students who had the chance to go through the full job-hunt season didn’t do that much worse when compared to their Japanese peers.

This, of course, has to be taken with a grain of salt because the DISCO survey discussed here covers only students “properly” enrolled in regular four-year (Bachelor) or two-year (Masters) courses at Japanese universities, excluding all those that stay for shorter amounts of time and are “only” doing a year abroad, for example. For most of them, 2020 and the complications that came with the spread of the Coronavirus meant going home early or not being able to come to Japan in the first place.

Effects of the Coronavirus

Now that you have an idea of the general trends, here are some more details on things that caused turmoil – or were simply different – in 2020.

With large gatherings of people being strongly discouraged, the big portal sites decided to cancel their usual job fairs. Rikunabi was first, announcing on February 20th, 2020 that all job-hunting events slated for March would be canceled. Mainavi followed on February 26th.

Since job fairs (合同説明会, ごうどうせつめいかい) – held in huge convention halls filled with booths – are a good way to get to know many companies in a short amount of time, this was a hard hit for many Japanese job seekers. When asked about what gave them trouble during their job hunt, “job fair cancellation” was at the top answer at 65.6% (Source: Survey from February 2021 by Gakujo).

Cancellations and postponements continued way past the end of March. Until the end of June, most students were limited to online options. However, after the State of Emergency was lifted, most events slowly returned to “real-world” venues from July.

Also starting in March, news of revoked job offers started popping up. Students that had been expecting to start to work in April were suddenly contacted by their companies, effectively being laid off before their first day. In some cases, these “layoff” messages arrived as late as five days before the first day of work.

In the end, the total number of affected students went up to 130 throughout 2020. Compared to the thousands of students that graduate from university every year, this is next to nothing – so it’s safe to say that the chances of the same thing happening to you are quite low.

Nevertheless, a lot of companies and municipalities offered “emergency support” for these students, usually in the form of specialized recruiting windows. For them, this was a welcome opportunity to market themselves as socially responsible organizations.

With the country in “soft lockdown” mode, companies had no other choice but to switch to online options for company seminars, interviews, and sometimes even drinking parties. This has impacted students both positively and negatively.

On one hand, students living in the countryside didn’t have to take multiple long and expensive trips to Tokyo (or other “big city” areas with huge amounts of jobs) anymore. Job-hunt related expenses dropped by around 30% from the previous year – from around 137k JPY (~1300 USD) in 2019 to 97.5k JPY (~928 USD) in 2020. The biggest drop occurred in the “transportation costs” category.

Because of the immediate connection established between job seeker and potential employer in an online interview, students also didn’t have to worry about things like proper elevator or knocking etiquette.

On the other hand, both students and companies reported that they could not get as good of an impression of the respective other during online interviews. There were also reports about students that had problems with internet data limits.

The Coronavirus is far from over, and 2021 is looking like it’ll be another tough year for job seekers, Japanese and international alike. At the same time, because people have been living with the virus for about one year by now, big shakeups like last year’s job fair exodus are less likely to happen. Here’s what you can do to secure a job even under these unusual circumstances.

Most Japanese job fairs organizers have resumed their events at “real-world” locations. The two big Japanese job portals MyNavi and Rikunabi will start holding events from March 1st as usual this year, with online attendance options for those who don’t want to take the risk. These events are aimed at regular Japanese students, but international students are welcome as well.

There’s also a good amount of events aimed specifically at international job seekers. The notable exception is DISCO, who hasn’t yet announced a date for their Tokyo Summer Career Forum. Still, if you’re in Japan and have the time to search for a job, you should definitely use your chance! For more info about events aimed at internationals, check the article linked below.

The traditional job-hunt schedule outlined at the beginning of this article may give you the impression that you’re dealing very narrow hiring windows in Japan. In the past, this was true. In recent years, however, the trend has been shifting to year-round recruitment – accelerated by Covid-19.
Aside from foreign companies, which are usually recruiting year-round anyway, many Japanese companies are open to applicants throughout the year as well.

If your Japanese level is good enough, use portals like Rikunabi and MyNavi or just plain old Google to collect some info and then apply to the companies directly through their recruiting sites. In this case, you’ll have to do some more research on your own. But if you’ve already been eyeing some companies, there’s no need to give up right now!

Need help with your job hunt?

To improve your Japanese and increase your chances of finding a job in a speedy manner, it’s best to let professionals guide you. Linguage Japanese Language School in Shinjuku specializes in a unique blend of Japanese education and business training that will help you along the way. Courses range from one month to a whole year. To find out more, have a look at detailed article on the school over here or just visit the official website by clicking the button below!

Finding a Job in Japan’s Hospitality Indus...
Finding a job in the Japanese IT industry
How to apply for a job in Japanese – Guide...
Share
find jobjob hunt

Why Japanese People (don’t) Change Jobs
Japanese Job-Hunting Portal Sites
Japan’s 10 most popular Companies in 2018
IT and Language – Working at Zenken Corporat...
What you need to know about Golden Week