Garbage in Japan: A Guide 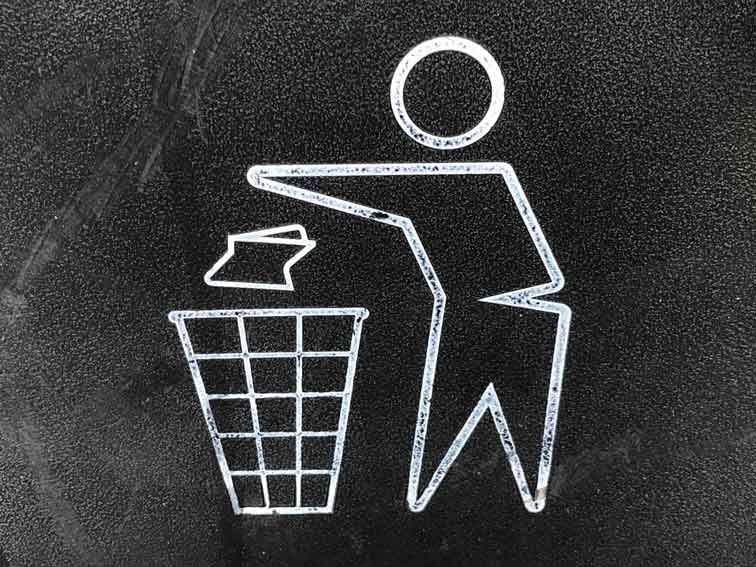 Japan is known for its complex system for trash collection and disposal. But don’t despair! After reading this guide, you will be ready for properly handling your garbage here.

Where does the trash go?

One thing you see a lot of foreigners in Japan complaining about – be it on the internet or in real life – is the absence of public trash cans. If you buy a bento box at the convenience store, you can easily end up having to carry the empty plastic container around for the rest of the day. “But why?”, I hear you say. “Are Japanese people really doing that?”

Well, the answer is: Yes. Japanese tend to take their garbage home with them. And when they get there, they separate it thoroughly.

Why, though? Well, Japan is famous for being a very cramped country. When the amount of available space is limited, even a little bit of garbage lying in the street becomes very apparent. In Tokyo and other big cities, trash bags and open garbage cans become the target of hungry crows in no time.

Japan is also simply producing a lot of garbage. Famous examples of “Japanese overpackaging” are plastic bags with cookies where each cookie is wrapped in another, smaller plastic bag, or individually packaged strawberries.

Also, especially in the big cities, you are rarely more than five minutes away from the next convenience store, and one minute away from the next vending machine. These things are convenient to have around, but also increase the frequency in which people buy things wrapped in single-use wrappings and containers.

Japan is often praised for its clean streets by visitors, but with all that trash around, this probably wouldn’t be the case if everyone just used public trash cans. Having to carry around your garbage might be annoying at times, but it turns out that it makes for nicer-looking cities.

There are, however, ways to get rid of your trash before taking it all home. There usually are recycle bins around supermarkets – you can use them to get rid of excess packaging and trash before it clogs up your personal space. At big events in public spaces (like fireworks in the summer), there’ll often be big, temporary dumping areas that you can just throw all your garbage in at once. 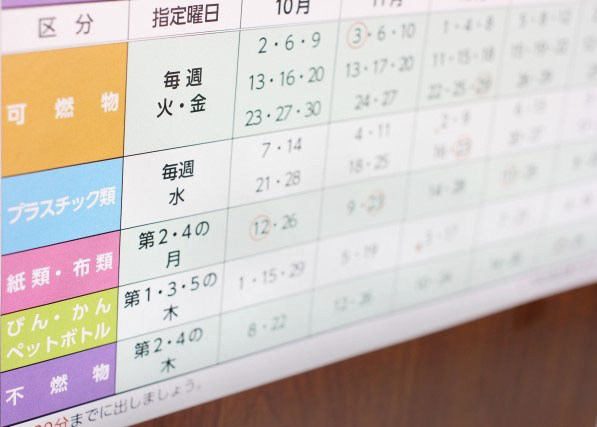 The five main types of garbage

Every country seems to have a different system on how to separate garbage. Japan has one of the more complex sorting structures in place.

Outside, when you encounter some of the rare trashcans, your choices are typically reduced to burnable, non-burnable, and bottles. Not too hard, right?

Things get tricky once you get home. There, suddenly, garbage is commonly distinguished into five different types, each with their own disposal rules and collection dates.

While there are certain general conventions almost every city follows, Japan doesn’t have a unified, nationwide-accepted trash separation system.

Instead, trash separation and collection are handled on the municipal level. This means that each city (and, in bigger cities, each district) can determine how it handles the garbage of its residents. This leads to lots of small differences in how trash is dealt with depending on where you live, which can cause confusion and frustration for newcomers.

For example, in the place where I’m living, regular paper garbage (“mixed paper”) is collected every Wednesday. However, you can’t put cardboard in there. Instead, you have to separate it alongside old newspapers, magazines, and milk cartons into “resource” garbage (資源物, しげんぶつ).

On top of that, I can’t even check online when the garbage will be collected. To find out the collection date, I have to call a certain district office or ask a neighbor. In some places, Japan really isn’t as high-tech as it’s often portrayed.

But enough about the exceptions. Let’s see what garbage you should be able to tell apart. 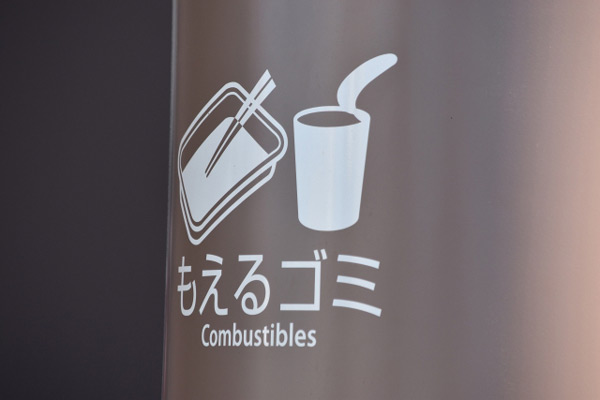 This type of trash is collected about two to three times each week.

See that your kitchen waste is as dry as possible in order to prevent bad smell. When cleaning up after cooking, make sure to remove as much water as possible from the things you throw away.

This type of trash is collected about one to two times each week.

■ Shampoo bottles
■ Bento trays and wrappings
■ Instant ramen bowls
■ Bags for snacks and sweets
■ Regular plastic bags (e.g. from the supermarket)
■ PET bottle labels and caps (not the bottles themselves)

This type of trash is collected about one time each week.

Make sure to clean these items beforehand by lightly washing off leftover food and removing contents. The caps for PET bottles also belong here, but not the bottles themselves! 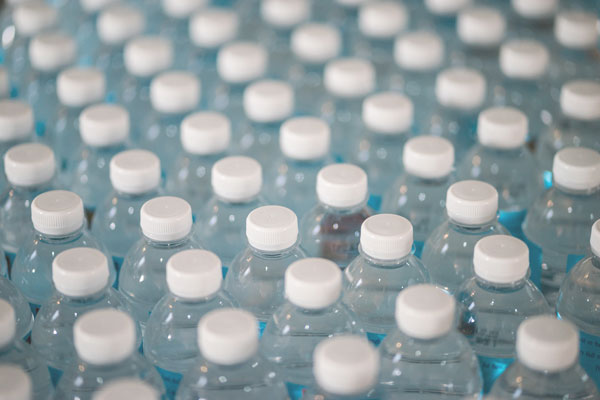 Examples of things included in this category:

This type of trash is collected about one time each week.

Clean the inside of the containers with some amount of tap water before throwing them in the trash.

When throwing away PET bottles, remove the cap and the label first. They belong either into the plastics garbage or burnable trash, depending on your location or what kind of trash container is available.

Examples of thing included in this category

Oversized trash is any object exceeding a certain size limit, regardless of the trash category.

In most cases, there will not be a set collection day for these sorts of items. Instead, you have to make a pick-up appointment beforehand by calling the oversized trash center (粗大ゴミ受付センター, そだいゴミうけつけセンター) or a similar place.

You’ll also have to pay a collection fee. As a rule of thumb, the fee will increase with the size of the items. For example, in Tokyo’s Shibuya district, to get rid of an iron, you have to pay 400 yen, but 800 yen for a fan heater and 2000 yen for a sofa.

To pay these fees, you buy so-called disposal tickets” (処理券, しょりけん) at your local supermarket or convenience store. They come in the form of stickers that you attach to the stuff you want to have picked up. 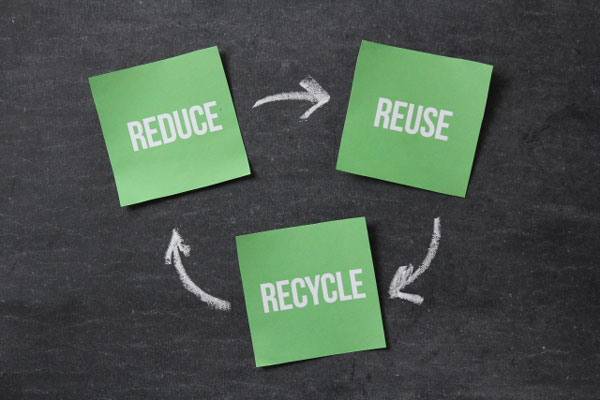 Now that you know the basic trash categories, here are some additional things you should keep in mind when handling your trash.

Reduce, Reuse, Recycle. The simplest way to minimize the time you spend sorting trash is to simply produce less of it.

Yes, this is easier said than done. But sometimes it can be as simple as taking your own carry bags with you when you go shopping or getting a reusable water bottle for your daily hydration needs. If you really don’t have a use for something any more, consider turning it into something else (e.g. using old clothing as cleaning cloth) before just throwing it away.

Don’t take out the trash at night. Most cities and districts strongly discourage their inhabitants from taking out the trash on the night before the collection day (if they don’t outright forbid it). The aforementioned crows are one of the reasons. Smell and bad looks are other concerns. Your neighbors will probably be more friendly towards you if you make the effort to take out your garbage in the morning of the collection day.

Don’t wrap plastic bags in plastic bags. Putting your waste into multiple layers of plastic bags makes its contents hard (or even impossible) to discern. Do the people collecting your garbage a favor and make it easy for them to see what’s in your bags.

Respect local rules. Even if you’re separating your trash correctly, there might still be smaller things that you have to consider. Some cities and districts have designated colored trash bags, and some places require you to write things on some types of trash when taking it out.

Check for exemptions. Even if you already have a vast amount of garbage separation knowledge, there will be times when you’ll not be sure. For example, what do you do with leftover cooking oil? In cases like that, check the website of your city or district. Many of them have detailed catalogs that list the right category of garbage of hundreds of common household items.

Recycling isn’t only good for our planet, it can sometimes even net you a bit of pocket money. Japan has many recycle shops – famous examples are the used book store chain Book Off and Shimokitazawa’s many used clothing stores. Second-hand shops, called リサイクルショップ, can be found all over Japan’s cities, from small corner stores to large halls, they take everything from furniture and electrical devices to board games and your old console.

As long as your things aren’t completely ruined or don’t work anymore, there is always a chance that you could sell it somewhere. So, before you simply throw your stuff away, consider this option for a minute.

English Writing Jobs in Japan for Foreigners
Guide to Internships in Japan
Taxes and Insurance when Working in Japan
Online Applications: Get Your Dream Job in Japan
Job-hunt in Japan: attending a company seminar ...