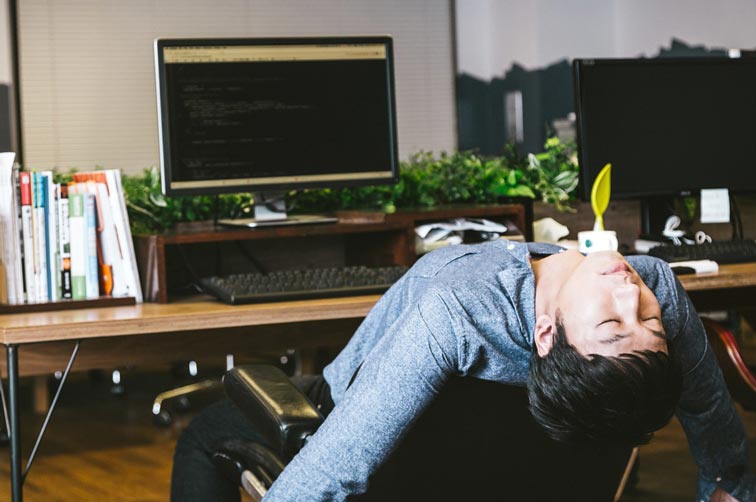 Working in Japan doesn’t have to mean endless hours of overtime work. Nevertheless, overwork is still an issue. Why is it still prevalent? What types of overtime are there? Do you have to “play along”? Read on to find out.

Work in Japan – Stay until the boss leaves?

If you’ve ever thought about working in Japan and have talked to your friends or family about it, you probably know what the average person associates with the topic.

Common stereotypes include only being allowed to leave after your boss and notorious drinking parties with colleagues. Aside from that, cases of death from overwork (過労死, かろうし) often make it into international media, shaping the image that Japan is a stressful and inconvenient country to work in.

“Why do the Japanese work so hard?” This question is often met with the response that it’s a cultural thing – it’s what the Japanese do, they’ve been raised that way. That answer, while not completely untrue, is pretty vague.
Below, you can find a short overview of cultural factors that have contributed to longer work hours in Japan’s past.

Loyalty to the company. One product of Japan’s rapid economic development after the end of World War II was the concept of lifetime employment (終身雇用, しゅうしんこよう). Once you entered a company, you stayed there until retirement, automatically receiving higher pay each year. Your company essentially became your second family. In this context, working long hours meant showing a high degree of identification with the company and was also seen as a gesture of gratitude.

Hard work VS efficiency. This is somewhat related to the previous point. If you’ve ever read a shonen manga, you know that “giving your best” (頑張る, がんばる) is a big deal in Japan. Of course, even Japanese companies do value efficient work. But a stereotypical old-fashioned manager would probably see it like this: If you get your work done fast, you have time left to do even more work. From that perspective, finishing your tasks for the day and leaving early is nowhere near “giving your best.”

The customer is king. International visitors often laud Japan for the great quality of its service. The high level of service has become so ingrained in Japanese society that many simply take it for granted. High expectations, however, can be a double-edged sword. The “customer is king” attitude, coupled with the “company as second family” thinking, makes it hard to speak up against unrealistic deadlines, for example.

Causing inconveniences for co-workers. “Causing someone an inconvenience” (迷惑, めいわく) is probably one of the arch-sins of Japanese society. Leaving early means that others who stay longer might not be able to get ahead with their work. From a non-Japanese standpoint, that might be shrugged off as their own problem. But in a group-oriented society like Japan, it can be seen as selfish and inconsiderate.

The current state of Overtime Work in Japan

It’s not hard to see how old-school work culture leads to long working hours. But that culture belongs to the last century. What about today? Shocking headlines of 80 to 100 hours per month still pop up from time to time, as do news of “death from overwork” (過労死, かろうし). How common are these things?

The average amount of overtime work in Japan in 2020 was 24 hours per month. This figure is based on data collected from openwork, a Japanese Glassdoor equivalent. In 2019, a survey by job board provider doda of 15,000 users yielded a similar result: 25 hours per month on average. 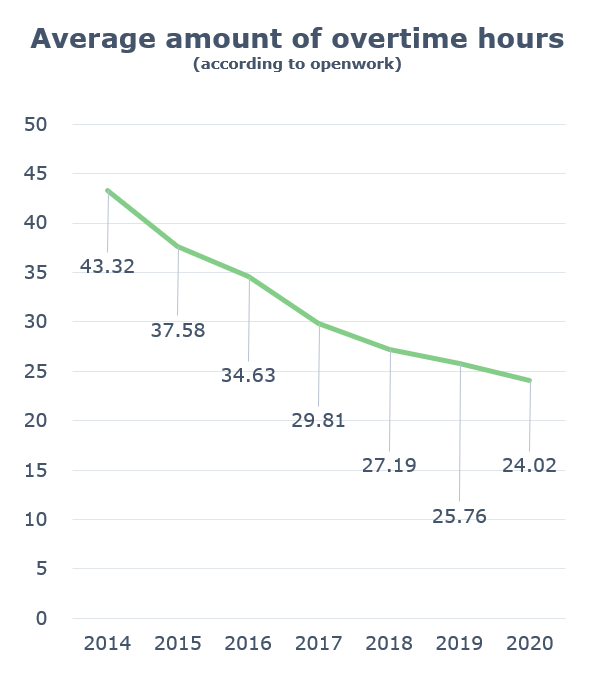 These numbers are much higher than the official data, released by the Ministry of Health, Labor and Welfare (MHLW). According to the ministry, the average amount of overtime across all job types was at a mere 13 hours per month in 2019.

This discrepancy occurs because the ministry numbers are based on data provided by the employers – not the employees. It’s probably safe to say that the openwork and doda data is more trustworthy because it’s based on answers by workers.

However, survey results can sometimes be misleading. This becomes clear when examining the 80 ~ 100 hours per month horror figure that’s floating around online. Is it total bogus? Well, not completely … it depends on how you look at things.

For example, according to an HR Souken survey from 2016, over 50% of companies in Japan had employees who did 80 or more overtime hours per month. However, upon a closer look, companies fell into the “80 hours or more” category even if only one employee worked that long. It might still not be a good look, but it doesn’t follow that every single employee is pressured to do the same.

Overtime hours are also affected by job type. For example, in 2019, the average amount of overtime per month was a whopping 4.16 hours in facility installation and management but only 15.4 hours in financial office work. When you take into account that there are also overtime divides between divisions at the same company, it becomes hard to draw a definitive conclusion.

In the end, you can only draw so much useful information from averages and single cases. There are more than enough companies in Japan that won’t force you to work a ridiculous amount of hours. Rather than worrying about the average, you should search for specific places that match your requirements.

Overtime Pay – how much do you get?

Overtime pay in Japan comes at a 25% to 35% premium. There are fringe exceptions, but for the most part, these are the conditions and rates for overtime pay:

These rates are additive. For example, let’s say that you work overtime on a holiday from 10 pm-12 pm. In that case, you would get both the holiday rate or 35% and the late-night pay of 25%, adding up to an extra 60% pay for every hour worked.

In most cases, you’ll have to apply for overtime in advance (残業申請, ざんぎょうしんせい) through some sort of internal system and get it approved. If you don’t, staying longer will be counted as voluntarily remaining at the company past working hours.

Not all overtime is the same. Below, you can find a list of terms – both official and inofficial – that are used in Japan when talking about overtime and what they refer to.

This is an official term used in government documents, laws etc. It points to extra work hours below the nationwide regular work hour limits – 8 hours a day, 40 hours a week as defined by the Japanese labor laws.

For example, if you work from 9 to 5 with a one-hour break in between, you work 7 hours in total. If you continue to work until 6, that one hour of overtime falls under this category.

Another official term, this one refers to overtime that exceeds the basic work hour limitations. Since 8 hours of work per day and 40 hours per week is the standard for most company employees, this type is what most people think about when they hear the term “overtime”.

Compared to “limited overtime”, the most important difference is that pay is required by law to be 25% higher than the regular hourly rate. There are also regulations for late-night work, work on weekends, public holidays, etc. that come with even higher markups (see above).

Pre-determined overtime is a common sight in Japanese work contracts. Instead of paying for overtime on a case-by-case basis, a certain amount of overtime (and the pay for it) is agreed upon in advance.

For example: A work contract includes a basic salary of ¥250,000 plus an additional ¥40,000 for 20 hours of pre-determined monthly overtime. For the employee, that means they will receive the ¥40,000 even if they’re not doing 20 hours of overtime. However, they also won’t receive any more regular overtime pay as long as they’re doing less than 21 hours per month.

This (legal) strategy is used by companies to avoid the 25% premium on regular overtime pay, among other reasons. So be careful when looking at job offers: Higher upfront pay often goes hand in hand with higher amounts of pre-determined overtime.

This informal term refers to unpaid overtime – the type you most want to avoid.

For example, a company might tell its employees to clock out at the regular time, but then asks them to stay for another few hours for “self-study” or something else that will not be officially considered “work time.” The expectation, however, is that they will do more work.

Employers knowingly forcing their employees to do this kind of overtime (or being aware of its existence, but not doing anything about it) are doing so illegally and can face penalties.

However, a lot of it tends to go unnoticed and unreported. Due to the lingering influence of old-school work culture, many worry about their jobs or their next evaluation and decide to put up with service overtime. However, in recent years the concept of work-life balance has started to catch on. Service overtime is now under much harsher societal scrutiny. People speaking up against it, and measures designed to combat it have increased in number.

You can see this as a sub-type of service overtime. It describes de facto overtime that occurs when employees take work home. Employees sometimes choose to take work home even if they are not encouraged or despite being outright forbidden to do so by their company. Similar to service overtime, the mindset here is: “Everyone is doing it, so if I don’t, I won’t get a raise/promotion.”

So does working in Japan mean long hours?

So now that we have gone through all of this, one question remains: Do you have to work long hours when living in Japan? The average numbers suggest that it’s unrealistic to expect no overtime at all. But to tell the truth, it all depends on where you work and what job you choose. Jobs with minimal (or no) overtime exist. It’s all just a matter of finding them.

One main reason why young Japanese people continue to put up with the remnants of the old system is that a great number of fresh university graduates still enter companies without any practical work skills. As a result, many tend to accept long work hours as a trade-off for receiving an “in-house education”, or a stable job in the first place.

As a foreigner with marketable skills (especially in high-demand sectors like IT), you have the luxury of being able to pick and choose. After all, if you don’t like it, you can always go back to your home country and aren’t bound to traditions that date back to the 1980s. This equips you with a degree of freedom that many Japanese can’t enjoy.

A Workday in the Life of an Engineer in Japan
Thoughts on Success in Japan
An Engineer’s Glimpse into the Japanese Work Cul...
Female Engineers in Japan
Share
Real Japanworking condition

How to Get Along with Your Japanese Boss
Practical Japanese – Tips from Company Train...
Suits or no suits – What to wear for your jo...
Online Applications: Get Your Dream Job in Japan
Business Japanese Vocabulary for Job Ads

How to Write Your Japanese Resume (Rirekisho)
Sleeping at Work in Japan – Myth of the Hard...
Job hunting in Japan and the Coronavirus
The Current State of Labor Productivity in Japan
Guide to getting your Internet plan for Japan