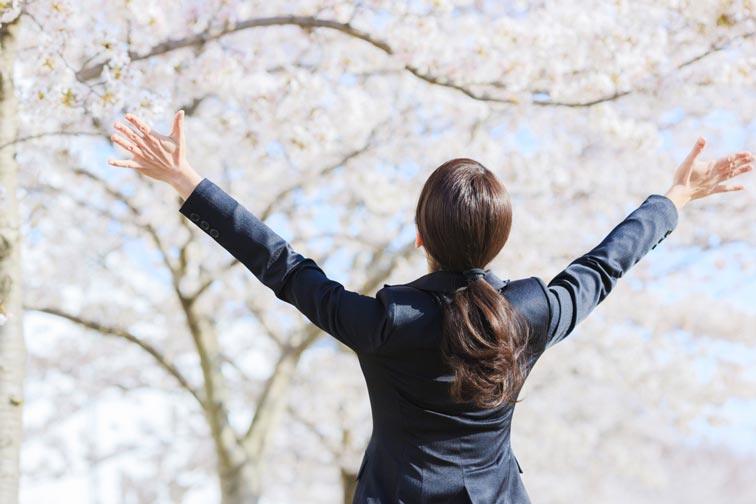 For international students, the strict Japanese job-hunting schedule comes with many limitations. But change is on the horizon. What will the future bring? Find out here.

If you have heard about how Japanese students search for their first job after university, you have probably heard of “shuukatsu” (就活, しゅうかつ). It’s an abbreviated version of the term 就職活動 (しゅうしょくかつどう) – “job hunt”. While this term describes the act of looking for a job in general, it also refers to the highly structured recruitment process specific to Japan.

Everything has its time

In Japan, students start their job hunt in their third year of university. Job-hunting season starts in March and can last until October, with even more time-specific periods for introductory events, tests, and interviews. Miss one part and you’re out. This strict and drawn-out schedule makes it hard for many exchange students to find the job they want here.

Recently, I met with students from my former university. They asked me about job-hunting in Japan. Can you do it “out of season”? When should you start? What about this company in particular? Questions like these can be pretty hard to answer on the fly, especially since there have been some big shifts recently. So, I decided to create an overview.

How are your plans going to pan out? Here’s the short version: If you’re planning to do your job hunt during this or next year, depending on the company you want to join, you have to play by the traditional rules. After that, searching for a job in Japan should become easier.

The traditional job hunt has been hugely influenced by the hiring rules that the members of the Japan Business Federation (日本経済団体連合会, にほんけいざいだんたいれんごうかい), also now as Keidanren, have imposed on themselves.

While the number of Keidanren companies is relatively small (around 1,400 in May 2019), many of them are very popular with job seekers. Among the Japanese members, there are companies such as the Mitsubishi Group, NTT Docomo, Toyota, Sony, and various Japanese banks, insurance firms and publishers.

However, you don’t have to be a Japanese company to join Keidanren. Quite a few big players from overseas like Google, Apple Japan, Goldman Sachs, JP Morgan, and DuPont have joined the federation.

The most important parts of the Keidanren hiring rules are the so-called “ban lifting dates” (解禁日, かいきんび) for the different sections of the recruitment process.

The next date is June 1st. Companies are now allowed to enter the selection stage (選考, せんこう), carrying out tests or exams and holding job interviews.

The final date is October 1st, the day from which tentative job offers (内定, ないてい) are allowed to be handed out to applicants. Despite the job offer being “tentative/unofficial”, getting one means that you’ve secured yourself a job at the company (unless you do something really stupid).

These rules are mostly a result of the effort to curb competition between companies in the years after the Second World War. They are also intended to let the students focus on their studies. If you’re interested in knowing more about how this all came to be, check out our article on the chronicles of the Japanese recruitment system.

Companies that haven’t joined Keidanren naturally don’t have to follow their rules. Over 99% of companies in Japan fall under the “small to medium-size” category (中小企業, ちゅうしょうきぎょう). In addition to that, there are startups as well as bigger Japanese and foreign companies that either can’t clear the hurdles for Keidanren membership or have simply chosen not to join.

Foreign companies with their HQ outside of Japan (外資系, がいしけい) are the quickest to hire. They have already given out most of their job offers for the following year by the time Keidanren members start carrying out tests and job interviews. For companies like this, there’s no use in waiting for “Shuukatsu Season” to start – just go to their recruiting homepage and apply directly. Well-known companies from this category include HSBC, Oracle, IBM, Reuters, and McKinsey.

Small and medium companies face strong competition from the big players during the main job hunt rush between March and May. As a result, many focus their efforts on the time before and after that period – starting around December and June respectively.

Bigger Japanese companies also start their recruiting early, with aptitude tests and interviews being carried out from February onward. Job offers for the following year start being given out as early as April. It’s these firms (as well as some big players from overseas) that you’re most likely to encounter at job fairs like the Tokyo Career Forum and others.

Abolishment of the rules

In October 2018, Keidanren announced that it would no longer uphold its hiring rules starting 2021. One of the main reasons that they are being done away with is that simply no-one playing by them in the first place.

For example, under the Keidanren schedule, companies are only allowed to start doing “job interviews” (面接, めんせつ) from June 1st onward. However, many companies avoid this restriction by inviting students to “interviews” (面談, めんだん), “exchange meetings” (交流会, こうりゅうかい) or “symposia” (座談会, ざだんかい) instead.

The only things that are different here are the names of the events and maybe the environment in which they take place. Their purpose – determining whether a student is a good candidate – remains the same. So, while companies are technically sticking to the rules, many of them are ignoring their spirit entirely by relying on semantics.

At the same time, a great number of students (and in turn, companies) still orient their activities by the Keidanren rules.

For the students, a big reason is the fact that the big job portal sites like Rikunabi and MyNavi launch on March 1st. Uncertainty is another factor. For many, the beginning of the job-hunting season is the first time they start thinking about what kind of work they want to do. For the companies, it’s about money – they can save resources by focusing their recruiting activities on one time slot.

That being said, numbers from the HR company Recruit show that in 2017, about 60% of job seekers had already received their job offer by June. That’s a pretty big number considering that Keidanren members can’t officially start giving out offers until October (even when you take into account that a certain amount of these offers come from non-Keidanren companies).

Another reason is competition. In the wake of the overall population decrease, the amount of freely available, young (and Japanese) talent is decreasing as well. Companies have to be more proactive now to prevent the most desirable human resources (優秀人材, ゆうしゅうじんざい) from joining the competition or even leaving Japan altogether.

So, now the “shuukatsu rules” are being done away with – 2020 will be the last year they apply to. Will the Reiwa era also usher in a new era on the job market? What will change?

The biggest change is that the big and popular Keidanren companies will be able to recruit year-round. To secure talent for themselves as early as possible, they will most likely attempt to “reach deeper” into the universities. That means they will hold introductory events, offer internships and test more students in their 2nd and 3rd years.

For the students, that means they will have more freedom to “have a look” at different companies as well as more time to prepare for their career if they decide on a company (or an industry) early on.

Almost paradoxically, however, this new freedom could lead to fewer Japanese students studying abroad, volunteering, etc. Students might fear that they will miss out on preparing for their careers if they don’t approach and commit to companies early (especially if they’re big and high-profile).

Of course, fewer restrictions are good news for international students. Searching for (and finding) a job in Japan will become easier. If you want to join a Keidanren company, you’ll no longer have to worry whether you’ll be able to stay until the end of the shuukatsu season.

Another result could be a more skill-focused approach during recruitment. Job adverts may become more specific and more alike to their mid-career equivalents. This is especially true for positions requiring “hard skills” (e.g. coding, data analysis, experience with industry-specific software, etc.).

Remnants of the old system

Looking back at the history of Japanese recruiting, the upcoming change is a big one. However, its effects will not be visible at once. Overall change (if it happens) is going to be slow – some companies may choose to simply keep to their regular schedule in the first few years.

One reason for this are the costs. Until now, many Japanese companies were able to focus on one season for PR, event participation, etc. Extending the same degree of activity to the whole year simply won’t be desirable or even feasible in some cases.

While there will be more opportunities to establish contact with a company at an early stage and new forms of recruitment will gain popularity, most will want to keep a designated “hiring season”.

Another reason is the way the Japanese spend their years in university. Right now, the prevailing idea on both the student and corporate side is that you attend university for universal education, researching the things you’re interested in even if they don’t have much merit for a career. Once you enter a company – that’s the point where you’ll start learning the stuff you REALLY need.

Because of this understanding, many Japanese companies have quite extensive “training on the job” programs. These become harder to organize (and cost more) when new people are joining all the time. Because of this, many companies will still limit starting dates to 1-2 times a year, even if they’re hiring year-round.

What should you do now?

If you will do your job hunt in 2019 or 2020, start by looking up whether or not – or how many of – the companies you’re interested in are members of Keidanren. (Search for their Japanese name in the member list).
To apply to them, you’ll either have to wait until the job-hunting season or establish early contact through a short-term internship or part-time job (look at their recruiting websites).

If your companies are not on the list, you can more or less go about things the same way you would do in your home country. Either search for application forms and apply directly or look for dates for introductory events, company tours or internships.

Be aware though: The way to a job in Japan will still be longer than what you’re used to, and the starting dates for most positions will be well in the future.
If you start searching last-minute, there will be fewer opportunities and many offers for “leftover positions”. So, it’s always a good idea to start looking as early as possible.

You want to Work in Japan? 5 Steps to make it ha...
How to apply for a job in Japanese – Guide...
Teaching English in Japan – An Overview
Share
find job

Guide to getting your Internet plan for Japan
Working as a Manager in Japan
Analog Relics at the Japanese Office
Working as a Video Creator in Japan
The 44 Most Common Japanese Interview Questions &#...

How to rent an Apartment in Japan – Step-by-step G...
A Workday in the Life of an Engineer in Japan
Web Development and On-The-Job-Training in Japan
What I wish I had looked into before Working in Ja...
Apartment, Share House and Co. – Housing in ...